Montgomery County, TN – When asked what constitutes a fun summer, most teenagers would include joys like pools, beaches, sleep, and most of all, not having to study for school. For a select few, however, eighteen hours of study per week sounds pretty exciting.

These brave souls form the Junior Classical League (JCL), an organization dedicated to the study of the classics – Latin as well as ancient Greek and Roman culture.

Roughly 1,300 students were in attendance to flex their scholarly, artistic, and normal muscles in competitive testing, art, and Olympika (assorted athletic contests). Five Clarksville schools were represented by a total of 24 delegates.

The following students earned a spot in the top 10 in the nation:

In addition to placing first in their Latin levels on their respective tests, Kee and Miller earned Best of Show honors for having the highest scores regardless of Latin level. They were literally the best in the country! Kee also earned a scholarship for his hard work over the past four years. 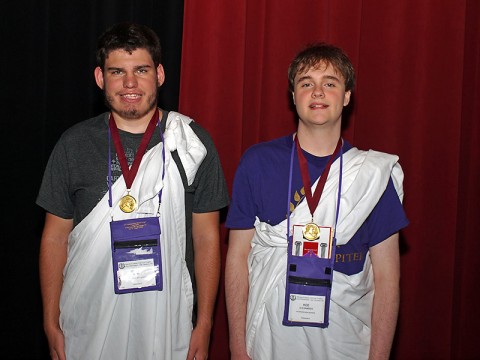 Riley Miller and Alexander Kee earned Best of Show honors for having the highest scores regardless of Latin level.

The state of Tennessee was represented in Latin 1 quiz bowl by four Rossview students (Lee, Ruiz, Stafford, and Brandon Zeedar), who made it to the semifinals. All of Clarksville’s JCL delegates are to be lauded for their dedication, perseverance, and passion for learning and pushing themselves.