Des Moines, IA – The Nashville Sounds never trailed and cruised to a 9-2 victory over the Iowa Cubs on Friday night at Principal Park.

The Sounds pounded I-Cubs starter Felipe Paulino early and often on Friday night, forcing the right-hander to surrender six runs on 59 pitches through two frames. Nashville loaded the bases for their cleanup man, Jason Pridie, who worked a six-pitch walk to open the scoring in the first. 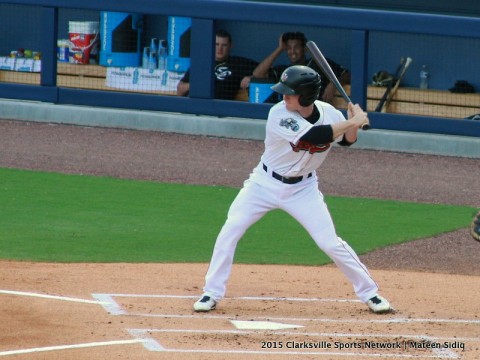 A triple also keyed the Sounds rally in the second inning. This time a man more familiar with the three-bagger, Wendle, came through, scoring Carson Blair from third on his seventh triple of the season. The speedy infielder then scored on an RBI single by Pridie.

The hottest hitter in the PCL, Ryan Roberts, got in on the act in the fourth inning, drilling a solo shot off the light tower in left field. The veteran won PCL Player of the Week last week, and now leads the league with seven homers this month.

Wendle (3-for-5) and Pridie (2-for-4) added to their gaudy stat totals in the ninth. First, Wendle drove Craig Gentry in with an RBI double. He then scored on another Pridie RBI single. Pridie had three RBIs on the night, and now has 76 RBI this season, the most he has had in a season since recording 86 with the Charleston RiverDogs in 2004. As for Wendle, he now has 134 hits this season, second most in the league.

The Sounds will start an eight-game homestand tomorrow when they welcome the El Paso Chihuahuas (Triple-A San Diego Padres) for their first ever trip to Nashville. Sean Nolin is expected to make his first appearance for Nashville since being placed on the disabled list on July 1st with a sore left shoulder, while El Paso is yet to name a starter. First pitch is scheduled for 6:35pm.