The Lady Govs came away with many positives after scoring four goals in two exhibition contests. 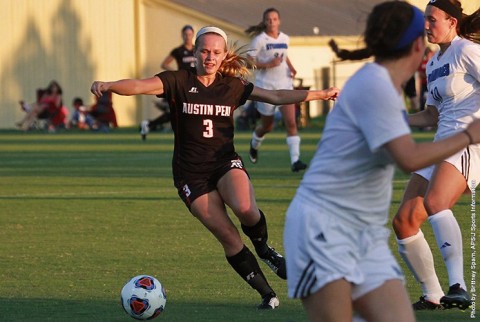 Head coach Kelley Guth [1] has been able to provide 10 newcomers with valuable experience in that time, while veteran players have returned to form. Senior Shelby Olszewski [2] scored a goal in each of the two matches and has been a mentor on the pitch for a young squad full of potential.

For the first time since 2008, the Lady Govs will open the regular season under the lights at Morgan Brothers Soccer Field. Two days later, Austin Peay travels east for the annual in-state encounter with the Mocs.

UAB will make the trip to Clarksville for the first meeting between the two teams. In the preseason Conference USA poll, the Blazers were picked to finish 12th, the same finishing position a season ago. The 2013 C-USA Tournament runner-ups are hoping to improve upon a five-win season as all-conference nominees Amy Brewer and Morgan Key-Adams reappear in the lineup.

Chattanooga is pursuing a resurgent season after going 1-17-1 in 2014. The Mocs were on opposite ends of the NCAA record book, with 99 goals allowed being the second-highest total in the country. However, this led to 159 saves made, ranking fifth on the list. McKenzie Gregg returns as the team’s leading scorer with two goals last year, along with senior Clare Latham who totaled seven assists.

Austin Peay hosted Chattanooga in a high-scoring contest, Aug. 24, 2014, with the Lady Govs earning a 5-2 win for their season’s first victory. Of this year’s returning players, Kirstin Robertson [3] and Caroline Wistrom [4] bagged their first collegiate goals, while Gina Fabbro [5] led the team in shots on goal with four. Nikki Filippone [6] and Lindsey Todd [7] each played 45 minutes in goal for APSU. Filippone made four saves in the contest, while Todd was credited with the win.

A victory by Austin Peay on Friday would be the first regular-season opener won at home since 2003.

The Lady Govs are 6-3 all-time against Chattanooga, and an additional win would extend APSU’s winning streak to five. In those nine meetings, APSU has outscored the Mocs 26-12.

Gina Fabbro [5] is seeking to become one of the top three leading scorers in program history. With her 14 career goals, the junior needs two to pass Andy Quiceno for third all-time.

Be sure to follow all the Lady Govs action at www.LetsGoPeay.com [8] and the Official Facebook page of Austin Peay Athletics. Live play-by-play coverage can be found on Twitter (@AustinPeaySocr), with live statistics for every home match available at www.PeayStats.com [9].