Through two games, the Lady Govs have produced positive results on the pitch. 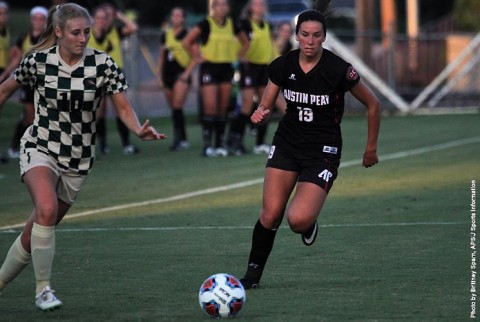 Two days later, at Chattanooga, the Lady Govs engaged in a second double contest before freshman Jennifer Smith [3] scored the game-winning goal in the 101st minute.

Ole Miss, who was picked to finish 10th in the SEC Preseason Coaches Poll, settled for a scoreless draw at Florida Gulf Coast to start the season. However, the Rebels responded against Boise State in their home opener, Sunday, to win 4-0. Ole Miss out-shot the Broncos 17-0 in the one-sided victory.

Friday, Ole Miss defeated Louisiana-Lafayette, 3-1, at home, with three different players – Addie Forbus, CeCe Kizer Gretchen Harknett – landing on the scoresheet. The Rebels return 20 letterwinners this season, with the lone subtraction being record-setting goalkeeper Kelly McCormick. Forbus and Olivia Harrison have been welcomed back to the pitch after leading the team with two goals apiece in 2014.

On September 12th, 2014, Austin Peay and Ole Miss met for the first time at Morgan Brothers Soccer Field. Mallory Burman [4] and Caroline Wistrom [5] each had two shots in the contest to lead APSU, but the Lady Govs were outmatched 22-5 in total shots. The Rebels marched forward early and often in the first half, taking a 2-0 lead by halftime as Olivia Harrison scored both goals. Lindsey Todd [6] made a game-high six saves after playing the final 45 minutes.

An Austin Peay win on Sunday would be its first over an SEC opponent (0-5-0 all-time).

Since moving from defender to forward, Olszewski has been the focal point of the Lady Gov attack. The senior has been called offside on a few occasions, but nonetheless, has gotten into the box for heading opportunities.

As head coach Kelley Guth [7] searches to settle on a regular starting lineup, four to five newcomers have started for the Lady Govs this season. McKenzie Dixon [8] has proven to be a threat up top alongside Olszewski and Wojick, while defenders Brooke Nigrin [9], Amber Bateman [10] and Isabel Holmes [11] have created a solid back line.

Austin Peay’s match against Ole Miss will be available to stream online courtesy of SEC Network+ on WatchESPN. Be sure to follow all the Lady Govs action at www.LetsGoPeay.com [12] and the Official Facebook page of Austin Peay Athletics. Live play-by-play coverage can be found on Twitter (@AustinPeaySocr).