Posted By Clarksville Online News Staff On Thursday, September 3, 2015 @ 6:00 am In Sports | No Comments

Clarksville, TN – Senior outside hitter Samantha Strother, of the Austin Peay State University volleyball team, has been named the Copies in a Flash APSU Athlete of the Week.

Strother brought back all-tournament honors from the Lady Govs opening-weekend visit to Purdue for the Mortar Board Premier, posting 30 kills in three matches.

The Richmond, Texas native got off to a slow start on the attack, combining for 14 kills in matches against Ohio and Purdue, although she did record 12 digs in the season opener against the Bobcats. 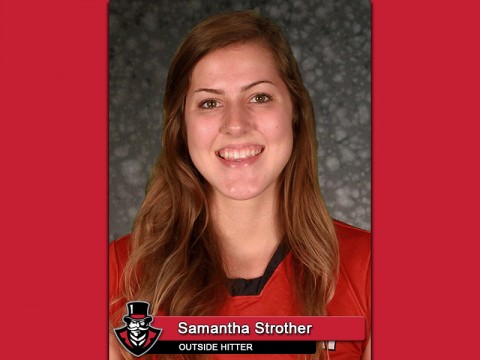 But in the weekend’s final match, Strother exploded for a career high-tying 16 kills in the Lady Govs four-set loss to VCU and followed that up with a 14-kill, 19-dig outing—her second career double-double—in Tuesday’s home opener against Evansville.