Clarksville, TN – After opening up the regular season at home for the first time since 2010, Austin Peay State University will step away from Governors Stadium for the first time this season when the Govs journey south to the Gulf Coast for a match-up with FBS foe Southern Miss, 2:30pm, Saturday, from M.M. Roberts Stadium.

The contest will be aired on the American Sports Network, locally on WUXP (MyTV30). 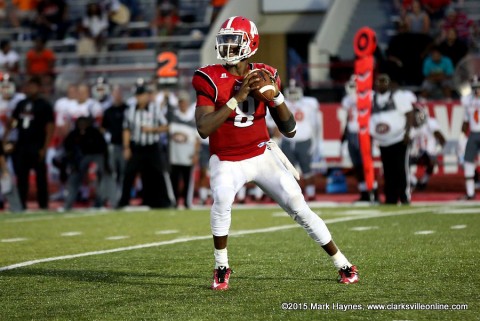 Austin Peay Football looks to get on track at Southern Miss.

Southern Miss will represent the first of back-to-back Govs’ road contests against FBS schools, with Austin Peay slated for a trip to Vanderbilt next weekend. Those two opponents will be the fifth and sixth FBS opponents APSU has played under head coach Kirby Cannon [1] and 12th since 2010.

Last week, Austin Peay opened the 2015 campaign with a 28-7 loss to Mercer—a game that was tied at seven at halftime. Unfortunately, the Govs were unable to capitalize on three second-half trips into Mercer territory, including a drive that ended in an interception after the Govs moved the ball inside the Mercer 25-yard line with the Bears up 14-7—Mercer would make it a two-score game with less than seven minutes left after the subsequent possession was turned into a TD.

After senior lineman Bernard Gauldin [2] went down on the first possession last week, the Governors offensive line will be in a state of flux this week. Guard Tyler Miles [3], who moved to tackle after Gauldin’s departure last week, is slated to shift back inside this week, and allow redshirt freshman Franklin Green [4] to take over at left tackle. Freshman Byron Glass [5] is also slated to make his first start at center.

Coming off a 34-16 loss to Mississippi State in the opener, Southern Miss seeks its first 2015 win as well. Although just 4-20 in head coach Todd Monken’s first two seasons, the Golden Eagles have a rich history in Conference USA and seek their first bowl appearance and winning season since 2011.

Quarterback Nick Mullens tied Brett Favre for second-most 300-yard passing performances in Southern Miss history with five after throwing for 311 yards in the season-opener against Mississippi State. However, the Golden Eagle ground game failed to average three yards per carry against the Bulldogs (36 carries, 102 yards, 2.8 ypc). Southern Miss has not had a 1,000-yard rusher since 2009, when Damion Fletcher finished a career that featured four straight 1,000-yard seasons.

Last Time Out Against Southern Miss

This will be the first meeting between Austin Peay and Southern Miss. In fact, Austin Peay doesn’t have much experience at all with Conference USA.

Although the Govs have a long history with current C-USA and former OVC members Middle Tennessee and Western Kentucky, just once—against Memphis in 2011—has Austin Peay played an active member of C-USA, dropping a 27-6 decision to the Tigers.

Check back at LetsGoPeay.com and on Austin Peay’s Official Athletics Facebook page often for up-to-date news about all Governor athletics, as well as the Governors football Twitter page (@AustinPeayFB). Live stats will be available during the game at www.LetsGoPeay.com [14] and all home games and Ohio Valley Conference games can be viewed on www.ovcdigitalnetwork.com [15] Postgame video interviews and other videos from around APSU Athletics can be found on our YouTube page (www.youtube.com/CultureofExcellence [16]).