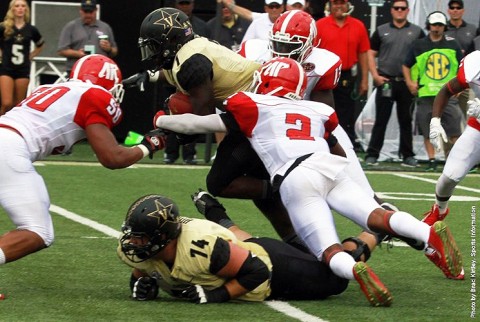 Those concerns bore out for the Govs on Saturday, with Austin Peay unable to find any cracks in the Vanderbilt defense in a 47-7 loss.

The Govs were able to amass just 144 yards total offense, and did not crack the century mark until midway through the third quarter.

The defense kept the Governors in it early on. On Vanderbilt’s first possession, the Commodores drove down inside the Austin Peay five-yard line, but the Govs were able to stonewall their hosts, with Corey Teague [2] coming up with a key fourth-down stop to give the ball back to Austin Peay.

After allowing only a 40-yard field goal by Vanderbilt’s Tommy Openshaw in the first quarter, the Govs caught an early break in the second when Juwan Davis [3] recovered a muffed punt on the Vanderbilt 17-yard line. With new life, senior Trey Taylor [4] hit junior Rashaan Coleman [5] on a short slant route, with Coleman taking it in from 14 yards out to give Austin Peay its first lead against an FBS opponent since the Govs defeated Kansas State in 1987.

Vanderbilt answered by marching down field with an eight-play, 78-yard drive. The Commodores provided a healthy dose of Ralph Webb on that drive, with the sophomore getting the ball on the drive’s final four plays, punctuating the journey with a three-yard touchdown run. The Commodores would tack on another Openshaw field goal later in the half and take a 13-7 lead.

Austin Peay punted with just over two minutes left in the first half, and Vanderbilt’s Johnny McCrary led a quick-strike drive that took just just 1:07 off the clock but concluded in a nine-yard McCrary-to-Webb hook-up for six. Vanderbilt’s two-point conversion attempt failed, and the Commodores took a 19-7 lead into the locker room.

Austin Peay’s defense did yeoman’s work in the first half, but spent far too much time on the field. Vanderbilt controlled the clock with nearly 18 minutes worth of first-half possession, totaling 268 yards offense on 37 plays.

Vanderbilt continued to work quickly on the second-half’s opening drive, marching 75 yards on six plays, with Webb finding the end zone yet again, this time on a two-yard rush, to extend the Commodores’ lead to 26-7.

While Webb did most of the scoring, Trent Sherfield was the player who gave Austin Peay the most trouble at Dudley Field. The sophomore posted 16 catches for a Vanderbilt-record 240 yards, including a 26-yard third-quarter touchdown reception. It was the first individual 200-yard receiving performance the Govs allowed an opponent since 2001.

McCrary scored on a 16-yard rush on the third quarter’s final play, and Dallas Rivers capped Vanderbilt’s scoring with a four-yard touchdown run in the fourth quarter.

Sherfield’s brilliance opened things up across the board for Vanderbilt. The Govs held Sherfield – and by extension, Vanderbilt – largely in check through the first quarter, allowing two catches for 16 yards to the former and just three points to the latter. But the Gainesville, FL native had two catches for 37 yards on the Commodores last first-half drive and then ran wild in the second half, earning 11 catches and 165 yards after halftime.

“There’s always a level of frustration that begins to build up on the defensive side too when you have consecutive one-two-three and outs and you are no playing very well on offense. There is a frustration level there that sometimes can lead to better play and most times its leads to a little bit less effort out of the defensive side because there doesn’t seem to be much chance of us scoring.” – Austin Peay head coach Kirby Cannon [1]

The Governors conclude their three-game road trip when they travel to Eastern Kentucky for a match-up with the Colonels, ranked 21st in the most recent FCS media poll and enjoying their bye week before playing the Govs.