Clarksville, TN – For the best part of the last 20 years Austin Peay State University’s baseball team has been at or near the top of the standings of the Ohio Valley Conference, so this past week’s announcement of the hiring of Travis Janssen as its new head coach should keep fans expectations high. 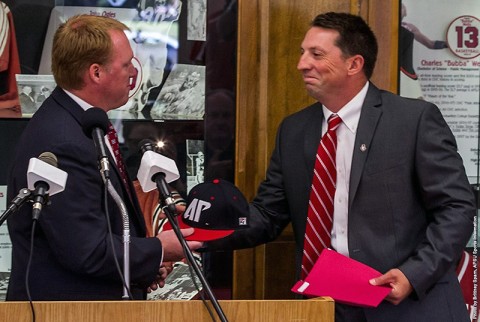 But the last two seasons the Govs missed the postseason, falling just short of making the OVC tournament field, something that the program and its fans aren’t used too.

So with the resignation of longtime head coach Gary McClure in August, Austin Peay needed to bring in a new coach who was a proven winner, recruiter and had a working knowledge of the OVC.

And there was no shortage of applicants, with almost 100 applying for the position, but of all of those, Janssen seemed to be the person to fit all of those requirements best for the university.

Janssen, who became the 11th head coach in the school’s history, comes to the program from Jacksonville State University — where he was a part of multiple OVC regular season and tournament championships as an assistant coach.

He was also an assistant coach at the University of Arkansas when they won a Southeastern Conference regular-season title and tournament runner-up in 1999.

Janssen has also had a part of coaching staffs that have produced 10 current of former major league baseball players, including Atlanta Braves outfielder Todd Cunningham and Donovan Hand, who has pitched for both the Milwaukee Brewers and Cincinnati Reds in his career.

But all of his success in college hasn’t just been as an assistant coach, having been a head coach at NCAA Division II Northeastern State (OK) University for four seasons (2012-15) and winning over 100 games with a program that only won six games total the season before his arrival.

It’s that past history and success that made the university feel that he was the best coach for the job and the person that could lead the Governors back to the top of the OVC, back into OVC tournament and ultimately back into the NCAA tournament field once again.