Austin Peay will be joined by Lipscomb, Western Kentucky, and Belmont at the Huston-Marsh-Griffith Tennis Center for the event. 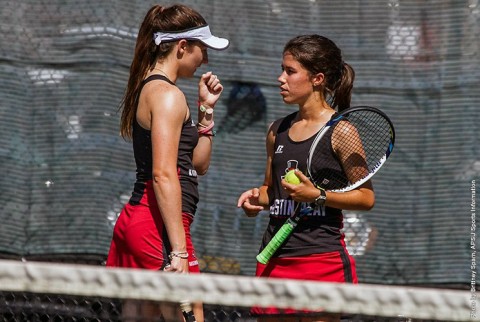 Coming off from a Flight 1 single’s title at the APSU Fall Invitational, Lidia Yanes Garcia [1] has high hopes of keeping up her undefeated record of 7-0. Last weekend, Garcia defeated UT Martin’s Hitomi Naito in the championship match 2-6, 6-4, 10-1.

Following her twin sister in Flight 1 singles, Claudia Yanes Garcia [2] finished the tournament as a semifinalist. She suffered her first loss as an APSU athlete to UTM’s Hitomi Naito.

In Flight 2 singles, sophomore Brittney Covington [3] defeated Belmont’s Jenna Krakau before losing in the second round.

Junior Isabela Jovanovic [4], however, fell short in the second round after her opening round bye.

In doubles, Lidia and Covington defeated Belmont’s Suzanna Stapler and Maddie Gilley 8-3 and Lipscomb’s Kate Kandyba and Thabile Tshatedi by injury. The other duo, Claudia and Jovanovic, fell to Belmont’s Lindsay Whitehead and Kendall Warren.