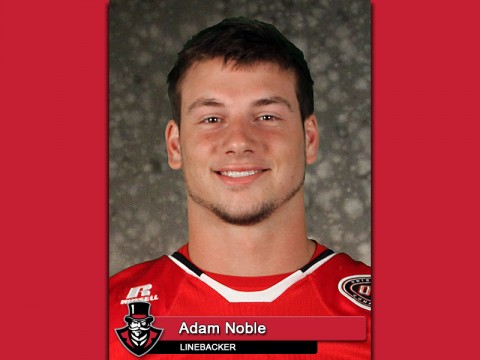 Nominated by their schools, which are limited to one nominee each, candidates for the awards must be a senior or graduate student in their final year of eligibility, have a GPA of at least 3.2 on a 4.0 scale, have outstanding football ability as a first team player or significant contributor and have demonstrated strong leadership and citizenship.

The class is selected each year by the NFF Awards Committee, which is comprised of a nationally recognized group of media, College Football Hall of Famers and athletics administrators.

Noble, from Springfield, Missouri, is a two-year captain for the Governors who has demonstrated outstanding capabilities on and off the field. A three-year starter, Noble tallied his 150th career tackle two weeks ago at Southern Miss and needs one more forced fumble to break into the career top-10 with six.

In the classroom, the two-time OVC Medal of Honor recipient has claimed every institutional and conference academic honor imaginable during his decorated academic career. Noble is a three-time OVC Commissioner’s Honor Roll standout, has been named to the Dean’s List and Athletics Directors Honor Roll every semester since Fall 2011 and has been on the President’s List (4.0 GPA) each of the last five semesters.

Steeped in Austin Peay from an early age—his father Gerald played for the Govs in the early 1970s—Noble is a criminal justice major concentrated in homeland security with an agriculture minor. Last summer, he interned with the Tennessee Bureau of Investigation (TBI).

Noble is one of only 23 FCS student-athletes to be named a semifinalist, and the only player from the Ohio Valley Conference.

The NFF will announce 15 finalists on October 29th, and each of them will receive an $18,000 postgraduate scholarship as a member of the NFF National Scholar-Athlete Class, presented by Fidelity Investments. The finalists will travel to New York City for the 58th NFF Annual Awards Dinner on December 8th, where their accomplishments will be highlighted in front of one of the most powerful audiences in all of sports.

At the event, one member of the class will be declared in dramatic fashion the winner of the 26th William V. Campbell Trophy and have his postgraduate scholarship increased to $25,000.