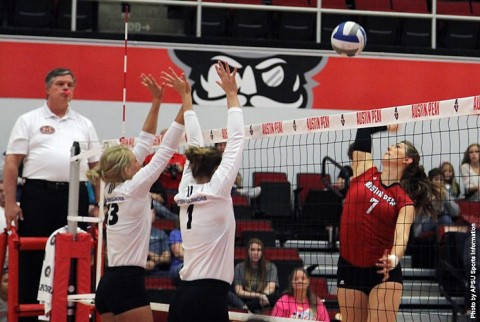 Austin Peay’s (6-15, 1-5 OVC) offense struggled for most of the match, hitting its stride only with a dominant second-set effort.

The Lady Govs posted 14 kills, but at a .444 attack percentage, in the frame along with five service aces to pull away for a 25-16 victory to level the match at one set each.

The Lady Govs nearly had a 2-0 lead in the match, but saw the first set get away. Austin Peay had set point at 24-21 but could not finish the frame. Eastern Illinois scored the final five points with three kills, a block and a service ace to win 26-24.

Austin Peay was a point away from winning the first set, leading 24-21, but Eastern Illinois escaped with the victory. The Lady Govs rallied with its best offensive performance of the match to tie the match at 1-1 before the break.

Eastern Illinois kept Austin Peay out of its offense in the third and fourth sets but needed big runs in each frame to win the match in four sets.

Austin Peay continues its four-match homestand in six days when it hosts Tennessee State in a 6:00pm, Friday contest.