Looking to snap the second-longest losing streak in FCS, the Governors (0-6, 0-3 Ohio Valley Conference) also seek to play spoiler against the Skyhawks. 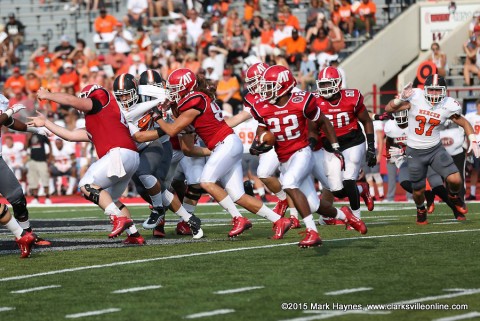 UT Martin (3-2, 2-1 OVC) need only to win against the Governors to lock up the Alvin C. York Trophy—awarded annually to the victor in the quadrangular season-series between the Govs, UT Martin, Tennessee State and Tennessee Tech—for the second season in a row.

Austin Peay’s offense continues to improve, seeing incremental point increases in each of the last four contests, but must avoid the end-of-half pitfalls that have become too common in recent weeks. In the last four minutes of the first half dating back to the Vanderbilt contest (September 19th), Austin Peay has been outscored 48-0, including game-altering 14-point swings against Eastern Kentucky and Eastern Illinois.

The Governors offensive burst has coincided with the ascension of Kendall Morris [1], who earned OVC Newcomer of the Week honors after his 136-yard outburst last week at Murray State. In his last three games, Morris has rushed for 352 yards on 55 carries (6.4 ypc) and three touchdowns, becoming the first Governor with a rushing score in three consecutive weeks since Ryan White in 2011.

Morris will face a stingy Skyhawk defense that held Tennessee State to 85 yards rushing last week. UT Martin got the win in its Homecoming contest against the Tigers, 28-14, thanks in no small part to a pair of blocked field goal attempts as head coach Jason Simpson moved into ninth-place in OVC history with 61 victories.

The Skyhawks put up plenty of points (35.0 ppg), but also give up their fair share as well (33.0 ppg allowed). Quarterback Jarod Neal (1264 yards, 16 touchdowns in five games) needs 170 passing yards to move into fourth place on UT Martin’s career charts and ranks sixth all-time in Skyhawk history with 48 touchdown passes.

UT Martin’s success comes in the trenches—the Skyhawks have recorded 14 sacks, led by Damani Taylor with 4.5, but have allowed just one sack on the season, which came in the season-opener at Ole Miss.

The Skyhawks are prone to falling into an early hole, having surrendered 72 first-quarter points in 2015, including 14 last week to Tennessee State. But they can make any deficit up in a hurry and have, outscoring opponents 148-93 in quarters two-through-four.

Last Time Out Against UT Martin

Austin Peay’s offense could get nothing going by land or air in the Oct. 25, 2014 meeting in Martin, the Skyhawks 496-170 total offense advantage led to a resounding 37-7 victory at Hardy-Graham Stadium. Wesley Thomas [2]‘ 43-yard touchdown grab provided the Governors only points, while Adam Noble [3] paced the defense with 10 tackles.

Check back at www.LetsGoPeay.com [8] and on Austin Peay’s Official Athletics Facebook page often for up-to-date news about all Governor athletics, as well as the Governors football Twitter page (@AustinPeayFB).

Live stats will be available during the game at LetsGoPeay.com, and all home games and Ohio Valley Conference games can be viewed on www.ovcdigitalnetwork.com [9].

Postgame video interviews and other videos from around APSU Athletics can be found on our YouTube page (www.youtube.com/CultureofExcellence [10]).