Hopkinsville, KY  – Austin Peay State University men’s golf team hopes to end its fall schedule on an encouraging note when it plays to the F&M Bank APSU Intercollegiate, Monday and Tuesday, at The Links at Novadell. 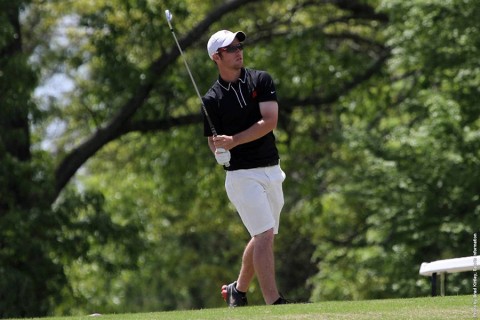 The 11-team tournament will have an Ohio Valley Conference flavor.

In addition to the Governors, Belmont, Eastern Illinois, Murray State, Tennessee State and UT Martin also will be there as will Bradley, Missouri State, New Orleans, Nicholls State and Western Illinois.

The 54-hole tourney (36 holes Monday, 18 Tuesday) will be played on a par-72, 6,972-yard layout. In the past, the Governors have proved dominant in their own tourney, winning nine times—including last year—in the previous 15 years (the 2007 event was rained out). The tourney also has seen APSU players claim medalist honors seven times, the last time being Marco Iten in 2007.

APSU coach Robbie Wilson [1] will utilize the same lineup the Govs have featured in the previous two tournaments, with seniors Chris Baker [2], Austin Kramer [3] and Tyler Phillips [4] along with junior Erik Hedberg [5] and freshman Justin Arens [6]. Sophomore Alex Rios [7] will play as an individual as will freshman Sean Butscher [8], who will be making his APSU debut.  The Governors have endured an uneven fall, struggling just last week at the Kenny Perry WKU Invitational, ending in 11th place.

“Our game plan is to end the (fall) season on a good note,” Wilson said. “Individually it could be different. Obviously, as a team we want to win but each person has their own goal set for this tournament. They know what they can do.

“Last week Olde Stone kicked out tails but we have good players and they are not stressing over that. They don’t feel any extra pressure but at the same time they are eager to show what they can do.”

“The keys are Baker and Kramer,” Wilson said. “They both have had a lot of past success. Chris has proven he can go low out there. He does it in practice, he has done well in (past) tournaments. We can talk all about it but there is nothing right now he is doing wrong. It has been a matter of getting off on the wrong foot, getting a bogey or double early.

“The guys know they are better than what they have shot (recently). It is like a baseball team who’s three, four and five hitters are in slump right now—the middle of the lineup is 1-for-30. We are working on it and we know we are going to have success.”

This will be the Governors fifth and final fall tournament, with the schedule resuming again in the spring.