Instant Peay Play: APSU Basketball Govs chances of making postseason may not be such a stretch

Clarksville, TN – Austin Peay State University’s men’s basketball team has missed the postseason for the past three seasons and is again picked to miss out on making the Ohio Valley Conference tournament in this year’s preseason poll by the conference’s coaches and sports information directors.

But looking deeper into the Governors 2015-16 squad and the other teams in the OVC, Austin Peay’s chances may not be as much of a long shot as that poll indicates, with APSU picked to finish fifth in the OVC West Division and what would be ninth overall in total points – with the top eight teams making the OVC tournament field. 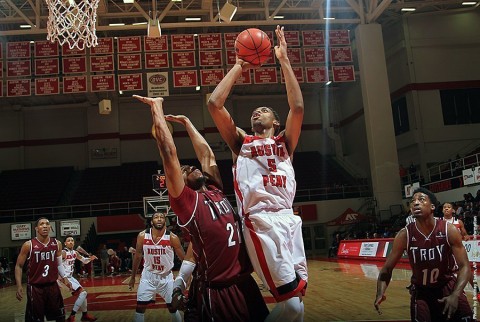 The Govs return six lettermen from last year’s team that posted an overall record of 8-22 and 3-13 in OVC play – including senior center Preseason All-OVC pick Chris Horton, who averaged 13.1 points and 11.1 rebounds per game as a junior; with those two averages ranking fifth and first respectively for returning players in the OVC.

Horton is also the Govs all-time leader in blocked shots (262) and ranks second all-time in OVC history in that category.

Joining Horton among the six returning Govs are two other starters in guards Josh Robinson (9.9 ppg, 1.7 rpg) and Khalil Davis (9.8 ppg, 4.9 rpg), while center Assane Diop and guards Tre’ Ivory and Domas Budrys round out returnees.

In the conference, only OVC preseason-poll favorite Belmont has a prohibitive advantage in lettermen returning with 11 (including a conference best four starters), while Tennessee-Martin (predicted to finish behind Belmont and Murray State) has eight letter winners back.

On the other end of the spectrum, three teams picked to finish ahead of the Govs (Murray State, Morehead State, Jacksonville State) only have one starter returning, while three others (Eastern Kentucky, Southeast Missouri, Tennessee Tech) have two starters back each.

Another factor that may work in the Govs favor is three teams picked to finish in front of the Govs will have new head coaches in 2015-16, with Dan McHale taking over at Eastern Kentucky, Matt McMahon at Murray State and Rick Ray at Southeast Missouri, while SIU Edwardsville also enters the season with a new coach in Jon Harris.

Of all of the new head coaches in the conference, only Ray from SEMO has had any head coaching experience at the Division I level leading Mississippi State from 2012 to 2015.

Bottom line, the Governors are picked to finish ninth in the preseason poll, but it can be argued that three to four teams picked to finish in front of Govs this season enter with more question than Austin Peay on paper. If the Govs play to their potential this season a return to the OVC tournament should be more than within reach of this year’s team.