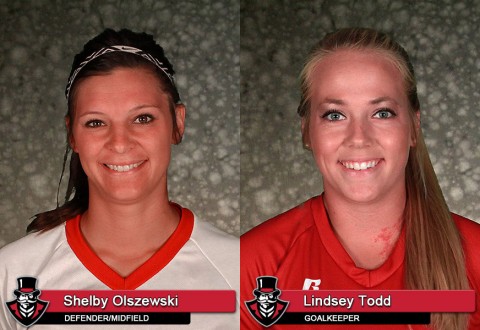 Olszewski, the Offensive Player of the Week selection, has been an impactful player for the Lady Govs this season, beginning with the opener against UAB as she recorded one goal and one assist.

The Pickerington, Ohio, native has appeared in all 17 contests after overcoming a knee injury last year, and has attempted at least one shot in all but one match.

Last weekend, Olszewski was the difference-maker offensively in Austin Peay earning two crucial wins over Eastern Illinois and SIU Edwardsville, notching a pair of game-winning goals with two assists. The senior now has 14 points on the season, a career-high, and is one score away from tying her career-best in goals with six.

The weekly award is the third of Olszewski’s career, but the first offensive honor after capturing two Defensive Player of the Week accolades in 2013.

“Shelby really stepped up this weekend and competed hard to the finish,” APSU head coach Kelley Guth said. “Against EIU, she had a great finish on a follow-up shot which showed great anticipation. In the SIUE match, she pushed through multiple players and scored a beautiful goal in a clutch moment for our team.”

Todd was named Co-Goalkeeper of the Week, the first OVC award of her career. It’s also the first time since October 14th, 2014 that an APSU player (Nikki Filippone) has received the honor.

After sharing keeper duties as a freshman, Todd captured the starting job in 2015 and has proven to be reliable between the posts. The Brentwood native has started all 17 contests this season, posting an 8-9-0 record, 1.72 goals against average and 57 saves.

“Lindsey has really stepped up this season,” Guth said. “She came up huge this weekend with great holds on several high balls where she collided with players, and made a great reaction save off a header which could have easily been a goal.”

The Lady Govs have now collected six adidas® OVC Player of the Week awards in 2015, the highest yearly total in program history.