Fort Campbell, KY –  When Soldiers look back on American military history over the last century, most can recall famous wars like Vietnam, Operation Desert Storm or Operation Iraqi Freedom. Often times, the American public can forget about Soldiers who lost their lives not in battle nor in combat 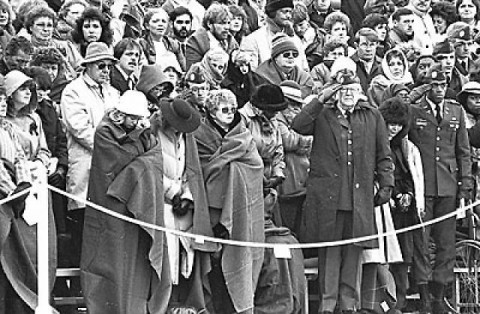 A past remembrance ceremony for Soldiers who perished at Gander, Newfoundland International Airport on their way back to Fort Campbell after a six-month peacekeeping deployment to the Sinai Peninsula is pictured. A ceremony has been held ever since the crash on Dec. 12, 1985. (Courtesy photo)

Two-hundred-forty-eight Soldiers died when their plane crashed over Gander, Newfoundland.

“I remember the sinking feeling when we were told the plane was confirmed as our flight,” said Jim Wassenaar, an infantryman with 3rd Battalion, 502nd Infantry Regiment, 2nd BCT. “The entire post was on auto pilot for a week or two after that day; everybody did their duties, but nobody seemed to know what was going on – it was a zombie land.”

“I remember when President Reagan did his speech; I could tell that he and Mrs. Reagan really felt our loss. When the cameras were off they wasn’t scared to let it show,” said the Worthington, Minnesota, native.

Over the years, Soldiers and families lost contact with each other and had to find ways to reconnect.

“This group started when a few of us old 3-502nd Soldiers found each other in a Facebook group and we started talking about the memorial services around Fort Campbell,” said Wassenaar.

Clarence Crawley, Jason Groff, Jim Titus, Joseph Sawtelle and I talked, and we decided that we should get as many of us as we can together, said Wassenaar.

What started out as conversation between four people quickly grew to a group of more than 320 Soldiers and family members.

“I started a Facebook group for the purpose of getting as many of the Task Force 3-502nd personnel together to make an impact,” said Wassenaar.

The group has helped people not only reconnect with one another but has helped to recreate bonds.

“The group has helped us all to heal, many of us, including myself, thought that we were alone with the pain – that we had felt over the years,” said Wassenaar.

“After finding the group, we realized that we are not alone and we never will be again,” said Wassenaar.

As the 30th year anniversary approaches, the Gander veterans want to continue to tell their story.

“The community needs to know that the people we lost have not been forgotten,” said Wassenaar.

“They’re remembered daily and they will be until the last person and or families involved are gone, as long as one of us is alive their memory will be alive with us.”