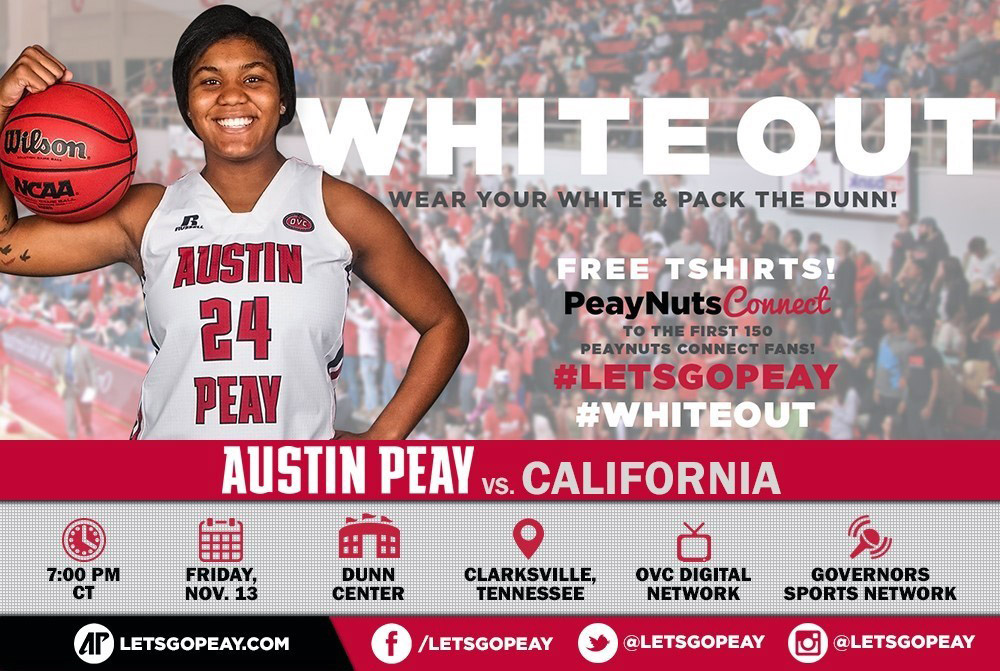 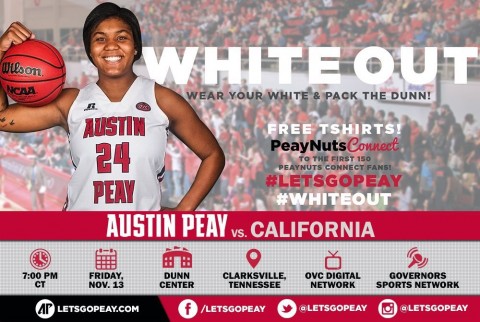 The contest will be a “White Out” affair, with Austin Peay fans encouraged to wear white for the Lady Govs opener.

Midlick inherits an Austin Peay women’s basketball team largely unchanged from its 2014-15 edition. Four starters and 11 letter winners return from a team that posted the program’s best record since 2010-11.

Austin Peay got a glimpse of the 2015-16 product with a November 5th exhibition contest against Division II Kentucky Wesleyan. The Lady Govs led the contest wire-to-wire, holding a 28-point advantage in the third quarter before settling on a 21-point, 88-67 victory.

About the California Bears

California returns two starters from last season’s team that reached the second round of the NCAA tournament. Sophomores Gabby Green and Mikayla Cowling return after starting 34 and 26 games, respectively. Cowling averaged 10.0 points and 5.0 rebounds per game last season while Green chipped in 6.7 points, 5.7 rebounds and 3.2 assists per game.

Joining them is a talented group of five newcomers led by Kristine Anigwe, a McDonald’s High School All-American. The 10-woman Cal squad features seven players 6-2 or taller. The Bears were picked to finish fourth in both the Pac-12 Conference’s preseason media and coaches polls and are receiving votes in both the USA TODAY Coaches Poll and Associated Press Poll to begin the season.

End its three-game home-opener losing streak, Its first home-opening win since the 2011-12 season. Be its first-ever victory against a Pac-12 Conference member in its first try. End a three-game losing streak in nonconference affairs. Be head coach David Midlick’s first victory as Austin Peay head coach. Make Midlick 46-16 in his third season as a head coach overall. Make the Lady Govs 452-650 overall since 1976-77.

Be its fourth straight loss in both season and home openers. Extend its losing streak to four games in nonconference contests. Give head coach David Midlick a loss in his APSU head coaching debut. Make Midlick 45-17 in his third season as a head coach overall. Make the Lady Govs 451-651 overall since 1976-77.

Head coach David Midlick and the Lady Govs kick off the 2015 season Friday with a White Out contest against Cal.