The next phase of this process will unfold 6:00pm CT when the Govs face No. 15/15 Indiana in a second opening-round game of the Maui Jim Maui Invitational in fabled Assembly Hall. 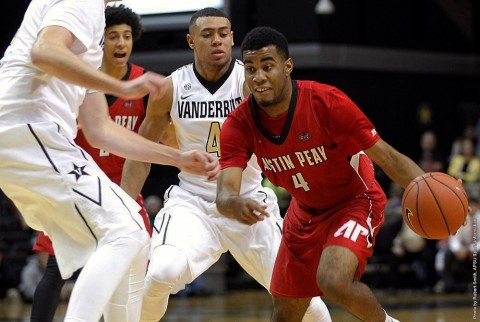 In a span of three days it will mean the Governors, who are meshing seven newcomers with six newcomers, will have to force feed this process a second time against a team teeming with experience—Indiana owns a roster with 285 career starts compared to 133—92 by Chris Horton [2]—for the Governors.

The Hoosiers, in other words, are not only experienced but talented and deep. Senior guard Yogi Ferrell is a preseason All-America after earning All-Big 10 a year ago. He is on the Bob Cousy Award Watch List for the nation’s top point guard.

All that was on display when Indiana opened the season, Friday, with an 88-49 win against its first Ohio Valley Conference opponent, Eastern Illinois. Considered one of the nation’s top offense, the Hoosiers placed six players in double figures.

Matching that offensive firepower will be a challenge for a Governors team that shot 22 percent against Vanderbilt in the opener.

APSU connected on just one three pointer in the contest and were credited with one assist as the Govs unwisely attempted to attack the basket against a team that had on the floor two seven-footers much of the time.

The Govs’ active post player did grab 14 rebounds as APSU held its own on the boards, being outrebounded 51-45.

After playing IP-Fort Wayne for their home opener, 7:00pm, Wednesday, the Governors will conclude the states’ regional version of Maui Jim Maui Invitational by traveling to Greeley, Colorado, to play Cal Poly, Saturday, and either host Northern Colorado or Maryland-Baltimore County, Sunday.