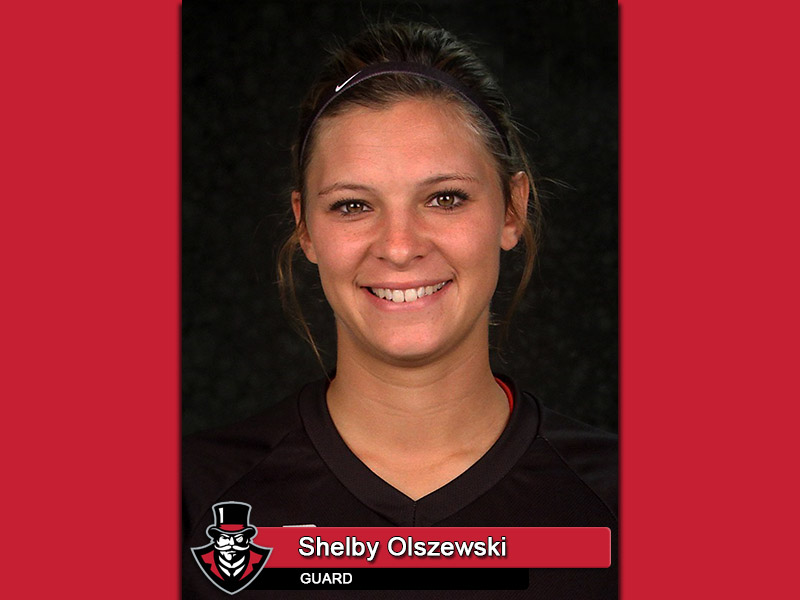 Clarksville, TN – Almost three years ago Austin Peay State University Lady Govs basketball player Shelby Olszewski thought her career on the hardwood was over, but several factors leading into this season have led her back to basketball and a second chance to end what she began on her own terms.

“I never really expected that I would come back (and play basketball),” Olszewski said. “I never thought I would do it, but my sister (Nicole) said to me when I told her that I was going to come back and play again said ‘at least you’ll get to finish what you started’”. 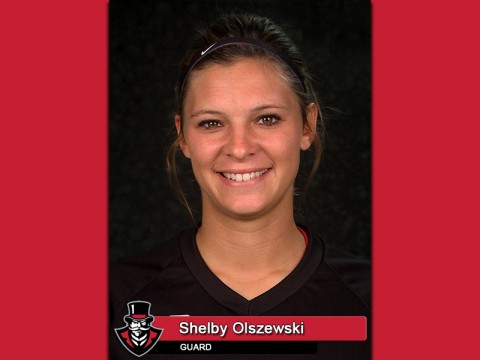 The Pickerington, Ohio native originally signed to play basketball for Austin Peay – joining her older sister Nicole on the 2011-12 team – and played two seasons for the Lady Govs, while making a name for herself as a tenacious defender.

But the then coaching staff felt Olszewski wouldn’t be a big part of the team’s future plans and the two parted ways.

Not wanting to transfer and possibly lose class credits, or miss her sister’s senior season, Olszewski elected to stay at Austin Peay.

“It was definitely hard coming to the (basketball) games,” she said. “I came to the games to support my sister, but besides that it was hard to watch without playing.”

But while her basketball career seemed to be over, her athletic career as Austin Peay wasn’t with her joining the soccer team and becoming one of their leading scorers and defenders – while earning All-Ohio Valley Conference Tournament honors in 2013 and multiple OVC Player of the Week honors over her three years on the pitch.

But while Olszewski wrapped up her soccer career this fall, new Lady Govs basketball coach David Midlick –who had been an assistant on the staff during Olszewski’s freshman season — made a commit to her in passing one day in the hallway about basketball practice coming up, as a lark. But several injuries to Lady Govs basketball players during the preseason led to Midlick seeing if Olszewski had any real desire to return to the hardwood.

“Coach (Midlick) just gave me a call and we talked about it (playing again),” Olszewski said. “I came to a few practices, watched, and once I started watching practice — and having already played for coach my freshman year and knowing how he was as a coach.

“If it hadn’t been coach Midlick it would have probably been a different situation,” she added. “But just knowing coach Midlick in general helped in my deciding to come back and play.”

It was that familiarity that also made it easy for Midlick to seek Olszewski out to join the team so late in the pre-season practice schedule as a late addition to the squad.

“Short term, we have injuries and there is a need for her to play,” Midlick said. “Long term, it doesn’t always work when you bring someone in during the middle of the season — or when the season is about to begin, like in this case — but I had absolutely zero reservations about it because of the type of person she is, the type of leader she is, and how she will rub-off on our underclassmen and the entire team. She’s a leader and someone I think the rest of the team will want to play with.”

Despite the late addition to the team, Olszewski has appeared in all five games so far this season for the Lady Govs, averaging just over 22 minutes per outing, with the team posting a 2-3 record.

“It’s been exciting and fun to be back out here on the court and playing with all the girls,” Olszewski said. “I think my game is coming back slowly, but it’s going to get there.

“Defensively, the first game back I felt that I was able to pick it up pretty quickly, but with more practices I’ll pick it up even more.”

“I know what kind of person she is,” he said. “What she’s all about, how hard she is going to work, accept her role and is going to do what I and the other assistant coaches want her to do. She is going to be a great piece to our team this year.”