Clarksville, TN – A week ago Austin Peay State University announced that football head coach Kirby Cannon would be relieved of his duties as head coach after three seasons, and an overall win-loss record of 1-34, but that in of itself won’t fix a program that has suffered through 29 losing seasons over the past 31 years.

But with the exception of two or three spans in its 79-year football history Austin Peay has struggled to win on the gridiron, with only 18 winning seasons (three more that finished at .500) for the Governors and an overall record of 275-520-16 for a .349 winning percentage. 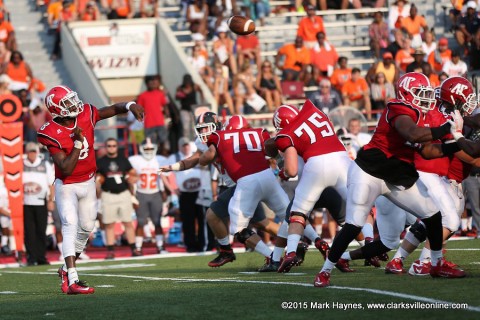 It’s even worse when it comes to Ohio Valley Conference play where the Govs have seven winning seasons in 42 overall seasons, only one in the last 21 years – coming in 2007 – and a win-loss mark of 97-201-2 and a .327 winning percentage.

First, the new coach: Cannon was making $147,175 a year as head coach and there is no question the next coach will make more than that per year and Austin Peay — and possible private funding – will have to pony up big bucks for a quality up-and-coming or established coach to direct the program.

Second, assistant coaches: Not only should the new coach have the freedom to bring in his staff, Austin Peay’s human resources office will have to lift what has been the current level of salaries for assistant coaches, with APSU being at or near the low in the OVC across the board the university won’t get the quality of assistants it needs to be successful.

Third, scholarships: With the return to scholarship football just over 10 years ago, Austin Peay was able to come up with a full complement of in-state scholarships monies, the Govs still struggle with out of state equivalence scholarships compared to the top-tier teams in the conference. Having in-state players is always a plus, but the odds of being a consistent winning program without a certain percentage of out-of-state players isn’t likely.

Fourth, recruiting budget: All things being equal, the quickest way to be competitive is to have talent and that requires a recruiting budget to be able to go out and find the talent, bring those players in for a visit to show them the school and facilities and be able to convince them to commit.

Fifth, continued improvements to facilities: While the new Governors Stadium has great start to upgraded football facilities, the Phase II of the project that will have the football coaching offices and a state-of-the-art football weight room at the stadium will help go a long way to adding to the allure of possible recruits.

Sixth, community support: It always helps when there are fans in the stands and that can be hard when the program has been struggling, but that’s where you first grow your overall fan base and with that financial support.

There are other things the university and community can do too, but now the focus is on the national search for the next head coach, with new Austin Peay athletics director Ryan Ivey leading a committee of university officials, alums and donors to find the right person to lead the program.

Austin Peay has set a target date to announce its next head football coach is December 15th.