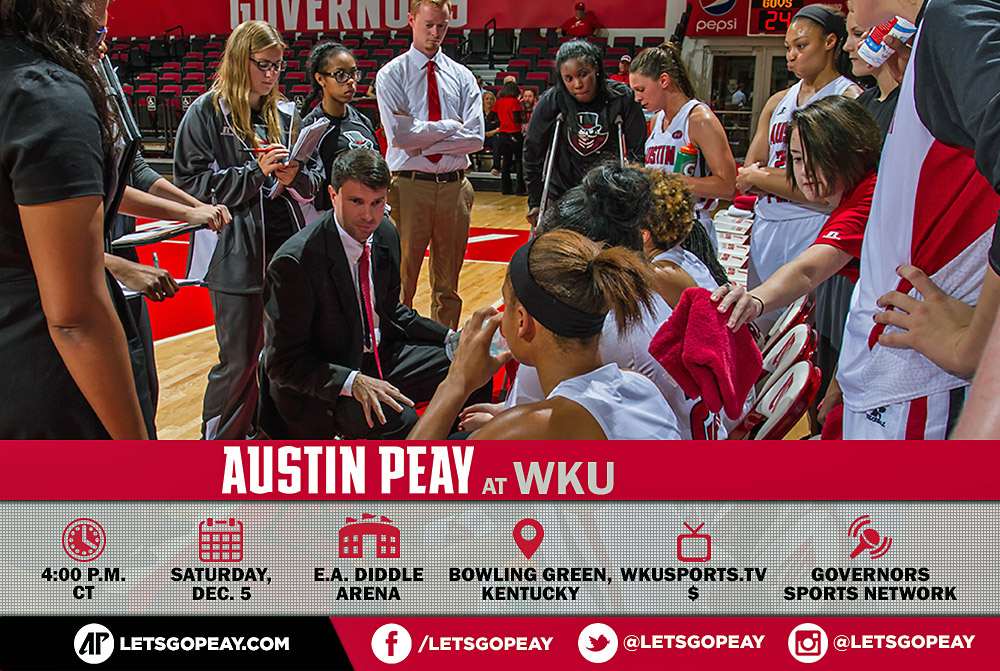 The Lady Govs return to action after a four-day break following the end of a whirlwind November schedule. 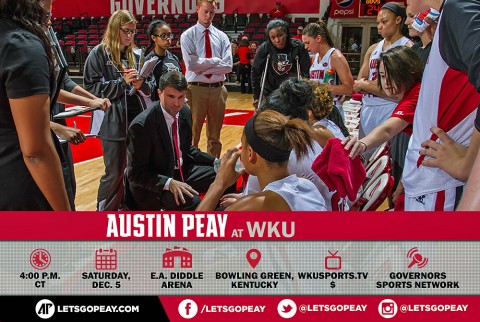 Austin Peay played nine games during the season’s opening month with no more than a three-day break between games.

That second half fade was on display in Monday’s 86-55 loss to Middle Tennessee. Austin Peay trailed by 12 points at halftime but surrendered the second half’s first 13 points and could not recover.

Senior guard Tiasha Gray led the Govs with 13 points and seven rebounds, but was held without a steal for the first time since January 30th, 2014 – ending a streak of 45 consecutive games with a steal.

Junior center Tearra Banks was held to nine points in Monday’s loss, but was 4-for-6 from the floor, the fifth consecutive game she has shot better than 50 percent from the floor. Sophomore forward Sydney Gooch made her first career start and scored a career-high nine points along with six rebounds.

Western Kentucky, the defending Conference USA regular-season and tournament champion, has started unevenly dropping its season-opener at Ball State before winning its home opener against then No. 16 Louisville. The Hilltoppers then won two games at the Great Alaska Shootout over the Thanksgiving weekend before losing at Mississippi, Wednesday. Saturday’s contest is WKU’s second home contest this season.

Despite being separated by just 60 miles, Austin Peay and Western Kentucky will meet for just the 20th time since 1976-77. The Hilltoppers own a 15-4 lead in the all-time series, including six consecutive wins. Austin Peay’s last victory against Western Kentucky came in the 1982 OVC Women’s Basketball Tournament, a 72-69 decision in what was WKU’s final contest as an OVC member.

Western Kentucky returns home after a three-game road trip that took it to Alaska for two games at the Great Alaska Shootout before a contest at Southeastern Conference foe Mississippi. The Hilltoppers share a common opponent with Austin Peay, both teams losing to Ball State. WKU lost its season-opener, 74-60 in Muncie, with APSU following with its own 72-44 loss in Muncie 10 days later.

Western Kentucky is working around the loss of All-America forward Chastity Gooch and the result is a three-headed beast. Senior guard Kendall Noble, sophomore forward Tashia Brown and sophomore forward Ivy Brown have combined for 38 points, 22 rebounds and 7.4 assists per game this season.