Field events are scheduled to begin at 10:30am with the women’s high jump, while track events are slated for 1:00pm with the 60m hurdles. Admission is $5.00 per person. 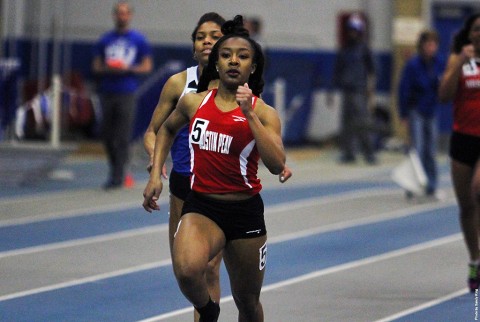 A wide array from teams across the region will open their indoor season at this event. Alongside Austin Peay and the host Commodores will be four Ohio Valley Conference schools—Belmont, Murray State, Tennessee State and Tennessee Tech—and regional powers such as Lipscomb, Louisville and Memphis, among other schools.

Austin Peay opened up the 2014-15 season at this same meet, with Kymmalett Ross [1] emerging as a bright spot thanks to a runner-up finish with a then-personal best 7.68 mark in the 60m dash and a third-place, personal-best 56.44 in the 400m. She will compete in both events, Saturday.

Ross’ sister Keyondria posted the Govs’ best high jump of the 2014-15 indoor campaign at this event a year ago, hitting 1.61m to place fourth in her first career event.

Another standout, senior Breigh Jones [4], will not be competing in her specialty, the 400m dash, but will instead run the 800m and a leg of the 4x400m relay.

Austin Peay will take the rest of December off for the holidays and resume indoor action at the Ed Temple Invitational hosted by Tennessee State, January 10th, in Nashville.