This will be the first time the Titans play the Jets at MetLife Stadium, which opened in 2010. They have won at the venue, however, defeating the New York Giants there on September 26th, 2010. The last time the Titans visited the Jets was Week 3 of 2009 in the final year of Giants Stadium’s existence.

This week’s game will be televised regionally on CBS, including Nashville affiliate WTVF NewsChannel 5. Play-by-play announcer Kevin Harlan and analyst Rich Gannon will call the action.

The Titans hosted the Jacksonville Jaguars last week and won by a final score of 42-39. The Titans scored six touchdowns in the victory, the most the club has recorded in a game at Nissan Stadium, which opened in 1999.

Quarterback Marcus Mariota completed three touchdown passes and rushed for another score in the win. Through the air, he was 20-of-29 for 268 yards, and his 118.2 passer rating gave him three games as a rookie with a passer rating over 100.

On the ground, Mariota’s day included nine carries for 112 yards, including an 87-yard touchdown run in the fourth quarter. The run was the longest by any NFL player in 2015, the third-longest by an NFL quarterback since 1960 and the fifth-longest run by any player in franchise annals.

Mariota’s performance was the first in NFL history in which a player passed for at least 250 yards and three touchdowns and added 100 rushing yards in the game. Only three other players—Russell Wilson, Cam Newton (twice) and Mike Vick—have passed for 250 yards and rushed for 100 yards in the same game.

Also, Mariota and Peyton Manning are the only quarterbacks in NFL history to record three touchdown passes four times during their rookie seasons.

Despite the high-scoring affair with the Jaguars, the Titans defense is still ranked in the top 10 in the NFL. The 336.1 average yards per game allowed by the defense is the league’s eighth-lowest total in the league. Additionally, the Titans have 34 sacks in 2015, which is tied for fifth in the NFL. 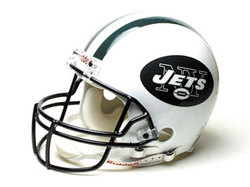 Against the Titans, the Jets will be playing at MetLife Stadium for the third consecutive week. After defeating the Miami Dolphins at home on November 29th, they were the “visitors” in last week’s game versus the Giants. The Jets came back from a 20-10 deficit in the fourth quarter to prevail in overtime by a final score of 23-20.

At 7-5, the Jets are in second place in the AFC East and in contention for an AFC playoff spot. After playing Tennessee, they finish the regular season on the road at the Dallas Cowboys, at home against the New England Patriots and at the Buffalo Bills in Week 17.

The Jets are in their first season with a new general manager and a new head coach. Mike Maccagnan was named to the GM post on January 13th after spending the prevoius four years as the director of college scouting for the Houston Texans, and the following day, Jets chairman and CEO Woody Johnson named Todd Bowles the organization’s new head coach.

Bowles, a former NFL defensive back, was the defensive coordinator for the Arizona Cardinals from 2013–2014, earning Associated Press Assistant Coach of the Year honors in his second campaign there.

Likewise, former Titans quarterback Ryan Fitzpatrick also is currently in his first year with the Jets. The 33-year-old is a veteran of 11 NFL seasons. In 2013, he started nine games for the Titans and passed for 2,454 yards and 14 touchdowns. With the Jets, the Harvard alumnus has completed 246 of 409 passes for 2,866 yards with 22 touchdowns and 11 interceptions.

Titans-Jets Series At A Glance

A Titans victory Would

QB Marcus Mariota could record the third 300-yard passing game of his career.

TE Delanie Walker (190 receptions with the Titans) needs 10 catches to pass Alvin Reed (199) for third on the franchise’s all time receptions list among tight ends and become the third tight end in franchise history to reach 200 receptions (Frank Wycheck and Bo Scaife).

LB Avery Williamson (96 tackles) needs four tackles to become the first player for the team in the “Titans era” (1999–present) to begin his career with consecutive 100-tackle seasons.

This is the 44th all-time meeting between the Titans and Jets in 56 seasons. The Titans are 24-18-1 in the series, including 1-0 in the playoffs.

This is the seventh time in the last nine seasons the teams have played but the first-ever matchup between the clubs at MetLife Stadium.

The last time the team’s met on Jets home turf was at the Meadowlands on September 27th, 2009. The Titans came back from an early 14-point deficit to take a 17-14 lead in the third quarter. However, four turnovers, including two interceptions and two fumbles on special teams, were too untimely to overcome, and the Jets prevailed 24-17.

The Titans then won two consecutive times over the Jets, including a Monday night game on December 17th, 2012. The Titans forced five total Jets turnovers—four interceptions and one fumble—and Chris Johnson set a franchise record with a 94-yard touchdown run in the 14-10 victory. Then, on October 6th, 2013, the Titans hosted the Jets and won 38-13.

They scored 28 points off turnovers and totaled five sacks. On offense, Jake Locker passed for 149 and three touchdowns prior to leaving the game with hip and knee injuries.

The Jets took the most recent meeting on December 14th, 2014 by a final score of 16-11. In front of their home crowd, the Titans had a fourth-quarter lead, but a one-yard rushing touchdown by Chris Ivory put the Jets on top with three minutes remaining on the clock. A frantic, last-second charge by the Titans ended on New York’s nine-yard line as time expired.

The Jets, like the then-Houston Oilers, were charter members of the American Football League. From the league’s founding in 1960 through the 1962 season, they played as the New York Titans before being renamed the Jets for the 1963 season. With the exception of 1967, the Jets and Oilers played twice each season from 1960-69, and the Oilers won the first six meetings in the series.

In 1991, the Oilers began a string of six consecutive victories against the Jets, including a 17-10 victory in a 1991 AFC Wild Card Game.

Chris Ivory’s one-yard touchdown run late in the fourth quarter gave the New York Jets a 16-11 victory over the Titans at Nissan Stadium. The Jets broke their three-game losing skid and extended the Titans’ winless streak to eight games.

The Jets defense also knocked starting quarterback Jake Locker out of the game in the second quarter. Locker, who started due to Zach Mettenberger’s shoulder injury, was six-of-11 passing for 57 yards prior to leaving. He was relieved by Charlie Whitehurst, who went 10-of-24 for 203 yards.

Whitehurst and the Titans offense had two possessions after Ivory’s score to try and retake the lead, but the first ended on downs at the New York 29-yard line. The second was equally fruitless but dramatic nonetheless.

With one second on the clock, Whitehurst took the shotgun snap and dumped a pass to running back Dexter McCluster, who then lateraled to wide receiver Nate Washington. Washington then lateraled the ball back to Whitehurst, who sprinted 20 yards before pitching it to tight end Delanie Walker. After breaking into the clear, Walker was tackled at the nine-yard line by safety Dawan Landry to end the game.

In the first quarter, the Titans took a 3-0 lead following a successful second drive, highlighted by a 26-yard pass from Locker to Washington. They drove as far as New York’s six-yard line but then lost 16 yards after a bad shotgun snap from center. That led to a 40-yard field goal by Succop.

A safety gave the Titans a 5-0 lead in the second quarter. The Jets were backed up, scrimmaging from their own six-yard line. While being taken down by defensive tackle Jurrell Casey in the end zone, Jets quarterback Geno Smith shoveled the ball forward for what was initially ruled a fumble, recovered by the Jets at the line of scrimmage. However, the Titans challenged the call, and it was reversed to an incompletion and intentional grounding in the end zone.

The Jets finally scored with 2:08 remaining in the second quarter. On the 13th play of a drive, which netted 57 yards, Nick Folk made a 51-yard field goal following a running-into-the-kicker penalty to make the score 5-3.

On the Titans’ next offensive play, Locker was injured. He dropped back and attempted to pass to Derek Hagan, but after releasing the ball, he was taken to the turf by defensive lineman Quinton Coples. Diagnosed with a left shoulder injury, he did not return and was replaced by Whitehurst.

On Tennessee’s first possession of the third quarter, Whitehurst moved the offense 62 yards on 14 plays, including a key 14-yard reception by Kris Durham to convert a third-and-13. Succop’s second field goal of the game was good from 33 yards and gave the Titans an 8-3 lead.

The Jets answered to take their first lead. Initially, Smith completed a pass to Eric Decker that went for an 81-yard touchdown. However, it was determined Decker stepped out of bounds after gaining 48 yards.

Nevertheless, the Jets continued to march down the field, helped by an unnecessary roughness penalty on Tennessee. On fourth-and-one from the nine-yard line, Smith dumped the ball to fullback John Connor, who not only got the first down but crossed the goal line as well.

Down 10-8, the Titans responded with their second score in as many drives. Leon Washington’s 46-yard kickoff return was followed by an 18-yard reception by running back Bishop Sankey. That led to a 51-yard field goal by Succop to reclaim the lead 11-10.

The Titans held the one-point lead until late in the fourth quarter. The Jets began what would be the game-winning drive with 8:20 on the clock at their own 24-yard line. They were stopped on third-and-15, but an unsportsmanlike conduct penalty on the Titans gave the Jets new life. They continued their trek, churning yards and taking time off the clock. A 37-yard run by Chris Johnson got them to the four-yard line.

Finally, on first-and-goal at the one, Ivory received a handoff from Smith and sprinted to the left pylon for a touchdown. The two-point conversion attempt was no good, but it would not be needed.