Seattle, WA – Tennessee erased a 16-point halftime deficit and led for portions of the second half, but a combined 60 points from Gonzaga’s Domantas Sabonis and Kyle Wiltjer proved too much for the Vols as they fell 86-79 at KeyArena on Saturday night.

The Vols (5-5) trailed by as many as 19 in the first half, but needed only the first 10 minutes of the second half to regain the lead after Devon Baulkman [1] buried a three with 9:43 to go. Tennessee and Gonzaga (8-3) teeter-tottered from there, but the Bulldogs broke a 75-75 deadlock with an 11-4 run to close out the game. 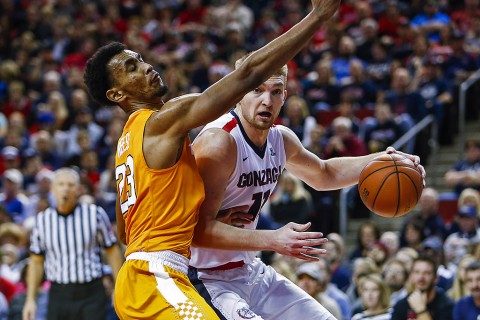 The Zags were led by a career-high 36 points from Damontas Sabonis and 24 points from Kyle Wiltjer. Sabonis went 12-of-16 from the floor while also pulling down a team-high 16 rebounds.

Kevin Punter [2] had 23 to lead Tennessee — his seventh consecutive game of 20-plus points. Joining him in double figures were fellow seniors Devon Baulkman [1] (17) and Armani Moore [3] (16) while Detrick Mostella [4] added a season-best 13 points off the bench.

Robert Hubbs III [5], who missed the last two games after undergoing an arthroscopic procedure on his knee earlier this month, returned to action on Saturday night, scoring three points in 19 minutes.