This week’s game will be televised regionally on CBS, including Nashville affiliate WTVF NewsChannel 5. Play-by-play announcer Andrew Catalon will call the action alongside analysts Steve Tasker and Steve Beuerlein. 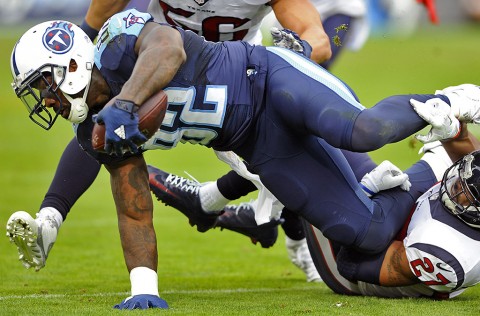 Tennessee Titans tight end Delanie Walker (82) extends for extra yardage after a reception during the first half against the Houston Texans at Nissan Stadium. (Christopher Hanewinckel-USA TODAY Sports)

The Titans played their final home game of the season last week against the Houston Texans. Texans quarterback Brandon Weeden passed for two touchdowns and rushed for another, and the Texans forced four turnovers en route to a 34-6 victory.

Against the Texans, Zach Mettenberger started at quarterback in place of Marcus Mariota, who was inactive due to a knee injury he suffered on December 20th at the New England Patriots. Mettenberger was 27-of-51 passing for 234 yards with a touchdown and an interception. The team’s lone touchdown came on a one-yard pass from Mettenberger to rookie wide receiver Tre McBride in the fourth quarter.

The Titans hope to get Mariota back for the finale. Entering Week 17, the second-overall draft pick already has set the franchise rookie records for pass attempts (370), completions (230), passing yards (2,818) and passing touchdowns (19). With one more touchdown pass, he would become the 11th quarterback in NFL history to reach 20 touchdown passes as a rookie. 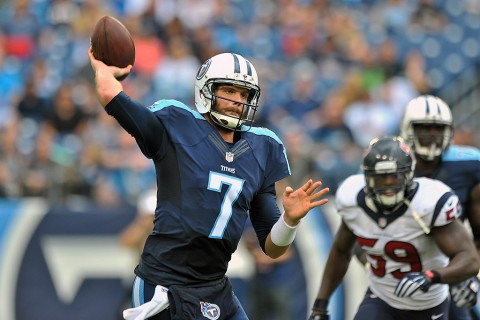 Also this week, tight end Delanie Walker can become the first tight end in franchise history to record 1,000 receiving yards in a season. His 994 yards leave him six yards short of the mark, and his 85 receptions already rank eighth in franchise history for a single season among all players. With five catches in the finale, Walker would record the fourth 90-reception season in the “Titans era” (1999-present), joining Derrick Mason (2003 and 2004) and Kendall Wright (2013).

The Colts broke a three-game losing streak last week with an 18-12 victory at  the Miami Dolphins. In doing so, they remained one game out of the division lead behind the 8-7 Texans.

To win the AFC South, the Colts need a number of outcomes to fall their way, beginning with the Denver Broncos beating the Cincinnati Bengals on Monday night, December 28th.

The Colts then would need to beat the Titans, the Texans would need to lose to the Jacksonville Jaguars, and several other games would determine the division tiebreaker based on strength of victory.

If the Colts can manage to win the division, it would be their fourth consecutive postseason berth with Colts head coach Chuck Pagano and quarterback Andrew Luck in place for the team. They earned playoff berths in each of their first three seasons since arriving in 2012, including 2014, when they won the AFC South and made it to the AFC Championship Game.

However, Luck has played in only seven games in 2015. He has been inactive for the last six contests due to abdomen and kidney injuries.

Luck’s absence has allowed former Titans quarterback Matt Hasselbeck an opportunity to play as a backup. In eight starts, the 17-year veteran has passed for 1,690 yards, nine touchdowns and five interceptions.

But an injury prevented him from finishing the game at Miami, and another former Titans signal caller, Charlie Whitehurst, was called upon to lead the Colts to the victory.