Clarksville, TN – It’s officially time to get down to business. 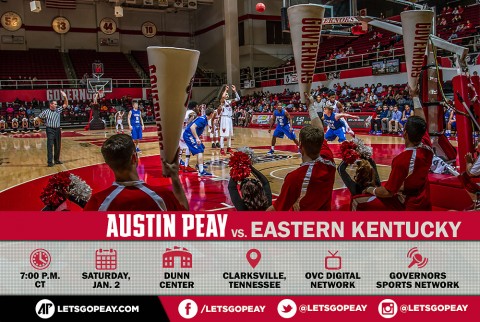 The OVC opener also will serve as a “Black Out” as APSU fans are encouraged to wear black APSU gear.

The Govs will enter league play after a 7-8 non-league mark, skewed by a 0-4 mark out of the gate and the fact APSU played nine true road games in November and December. The Govs, who were selected to finish fifth in the OVC preseason poll, have heightened their expectations by improving offensively and defensively from a year ago.

Senior Chris Horton [1], who averaged 13.1 points per game as a junior, has elevated his game in all aspects. The Govs post player is averaging 18.2 points, shooting 60 percent from the floor, and 12.6 rebounds per game—to rank fourth nationally. He earned national recognition before Christmas when he made 16-of-17 shots in the Govs’ come-from-behind win at Lipscomb.

But Horton has been able to gain more inside freedom because of forward Khalil Davis [2]‘ and guard Josh Robinson [3]‘s improvement. Davis is averaging 13.7 points per game while Robinson is at 14.9 ppg. That offensive balance has been noteworthy as the Govs began to gain footing in late November.

The Governors open OVC play against an Eastern Kentucky team that has found much early season success, despite replacing not only lost two All-OVC players (Corey Walden and Eric Stulz) but their coach (Jeff Neubauer) as well after tying for the OVC East crown a year ago.

But with former Louisville assistant Dan McHale taking over as Colonels head coach and the additions of fifth-year graduation transfer Jarelle Reischel, South Florida transfer Javontae Hawkins and freshman Nick Mayo, the Colonels have not missed a beat.

The Colonels carved out an impressive 9-6 pre-league slate and put themselves in position to again threaten for the East crown.

And the offense centers on the surprising Reischel. Never averaging more than 5.7 points per game in stops at Rice and Rhode Island, the 6-7 Reischel is averaging 20.2 points and 7.9 rebounds per outing. He is shooting 53 percent from the floor and nearly 50 percent from behind the arc. An 85 percent free-throw shooter, Reischel already has attempted an astounding 119 free throws, making 101—both figures are fifth nationally.

In other words, the Colonels and McHale have borrowed the Rick Pitino style of full-court defensive pressure along with a high volume of three-point attempts.

This is the fourth of a six-game homestand. In addition to facing the Colonels, he Governors also will play OVC home contests against Jacksonville State (January 7th) and Tennessee Tech (January 9th).