Nashville, TN – After playing first-place Tennessee Tech last Saturday, Austin Peay State University will battle this weekend the other two undefeated Ohio Valley Conference teams who are immediately behind the Golden Eagles in the East standings. 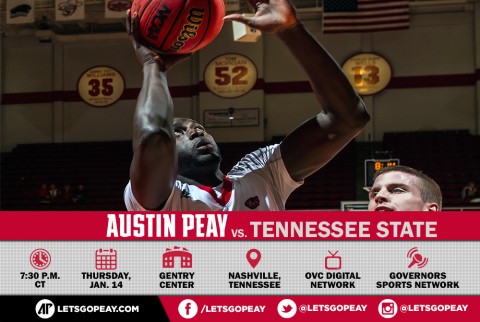 First up will be a 7:30pm, Thursday matchup with Tennessee State at the Gentry Center before the Govs return to Nashville, 7:00pm, Saturday, to clash with Belmont.

Both TSU and Belmont enter Thursday’s action with a 3-0 league mark, trailing by one-half game 4-0 Tennessee Tech. Although Belmont, the preseason favorite to win the OVC East, was expected to be at or near the top of the standings, Tennessee State was not. In fact, the Tigers were chosen sixth in the OVC East preseason poll. They will be the Governors’ first OVC road opponent.

Not only are Dana Ford’s Tigers exceeding early OVC expectations, their 12 wins (against four losses) already is more victories than they had combined (10) over the previous two years. They enter Thursday’s on a three-game winning streak after owning a seven-game win streak earlier this season.

It’s the presence of three newcomers that have inspired the Tigers turnaround. Guard Keron DeShields, who sat out last season after transferring from Montana, leads the TSU scoring at 15.4 points per game.

Meanwhile, junior Tahjere McCall, who also sat out last season after transferring from Niagara, is averaging 12.7 points per game. He is coming off a week that saw him earn OVC Newcomer of the Week after scoring 42 points last week, including 24 in a road win at Eastern Illinois. Averaging nearly 20 points per outing in three OVC tilts, McCall also is 12th nationally in steals.

Navarro College transfer Wayne Martin is averaging 12.3 points per outing while his 10.1 rebounds per outing is second only in the OVC to the Govs’ Chris Horton [1]‘s 12.6. Horton tallied his season’s 14th double-double (50th for his career) with 20 points and 11 rebounds against Tennessee Tech in a 72-66 defeat, a contest that slipped away from the Governors at the free-throw line, where APSU was just 8-of-18.

It proved to be a frustrating Govs defeat. In fact, APSU dominated the game in the paint while holding sizable advantages in second-chance points, fast-break points and points off turnovers. It was charged with only 10 turnovers. The Governors will need that type performance and more against the OVC’s most improved team.

Guard Josh Robinson [3] is coming off one of his most complete performances as a Gov. The sophomore scored 16 points, including 4-of-7 three pointers, while grabbing a career-high eight rebounds. He also had four assists and one turnover. He has been charged with just one turnover in the last two games, covering 70 minutes.