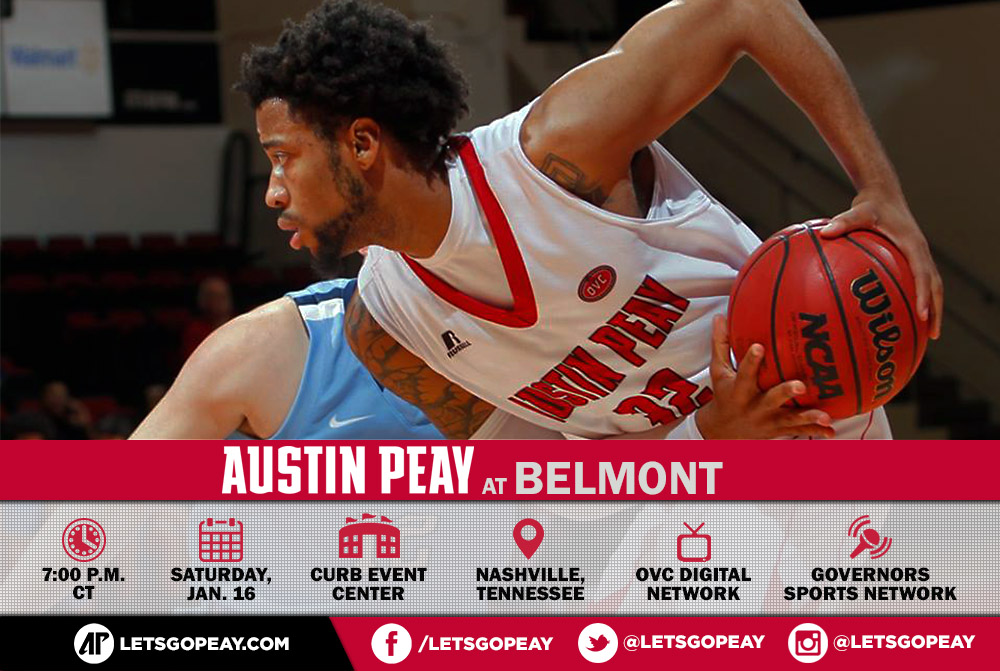 Nashville, TN – Trying to find an Ohio Valley Conference road victory is never easy. Attempting to do it against the OVC East co-leaders in back-to-back games, well, that is even more difficult.

After stumbling in a 66-52 loss at Tennessee State, Thursday night, Austin Peay State University men’s basketball team will attempt to bounce back against Belmont, 7:00pm, Saturday, in the Curb Event Center. 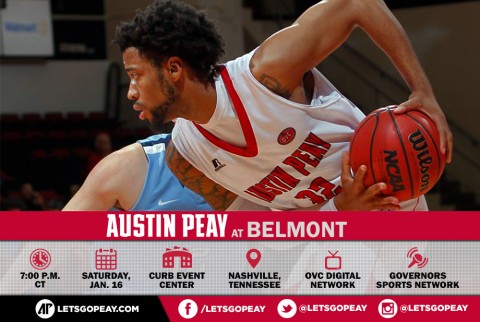 And APSU will attempt to achieve that first OVC road victory against a team that not only is tied with TSU for first in the OVC East at 4-0 but one that seems to be firing on all respective cylinders as reflected by the Bruins’ 81-73 victory against Murray State, Thursday night.

In fact, the Bruins, the defending OVC tourney champs, have not lost since dropping back-to-back contests to Middle Tennessee and Cleveland State in mid-December.

In OVC play alone, Belmont is averaging 86 points per game, shooting 51 percent from the floor while holding the opposition to 43 percent. The Bruins are averaging nearly 12 three-point field goals made per game.

Forward Evan Bradds has been stellar during conference play, averaging 20 points and 12.8 rebounds per contest. He is shooting a nearly ridiculous 73 percent from the floor. Right behind him is Preseason OVC Player of the Year Craig Bradshaw at 18.8 ppg, He is converting 50 percent (16 of 32) of his three-point attempts during conference play.

The Governors, meanwhile, are coming off a disappointing performance at Tennessee State, one where APSU again was unable to overcome early Chris Horton foul trouble. Without the Govs inside threat in the first half, the Govs shot just 31 percent from the floor in the opening 20 minutes—scoring just 22 points.

As a result, the Governors never were able to find their offensive rhythm even after Horton returned to the floor late in the first half and the entire second half. APSU was credited with only five assists for the game and was charged with 15 turnovers. In addition, the Governors shot less than 40 percent in both halves and manufactured just 19 field goals the entire game compared to 27 for Tennessee State.

This is the last of a short two-game road trip. The Governors will return home 7:00pm, Thursday, to play SIU Edwardsville.