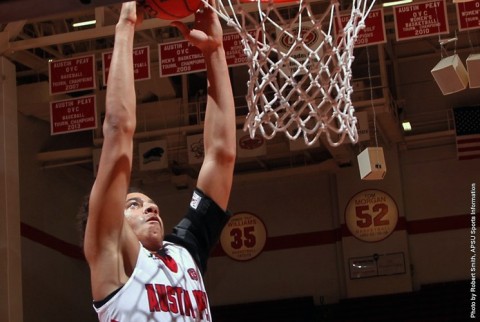 After Josh Robinson [1] had given APSU the lead, 86-85, by nailing a pair of free throws, the Panthers inbounded the ball to Riley who drove the length of the floor, muscling a shot off the glass over the outstretched hand of the Governors’ Chris Horton [2], who attempted to help on the play.

Until Riley’s game winner it appeared to be a second straight game where the Govs were going to steal a win after being down substantially in the game’s final minute—the Govs were down by five with 39 seconds left against SIU Edwardsville, Thursday, before winning in overtime.

APSU fouled Riley, who proceeded to miss both attempts, allowing the Govs a chance to cut further into the deficit. Robinson then drove again to the basket for APSU and was fouled with 27 seconds remaining. However, the sophomore missed the free throw but senior forward Khalil Davis [4] snared the rebound and immediately called timeout with 24 seconds left.

Robinson, who struggled much of the night from the floor, again drove to the hoop and scored on a layup with 17 seconds left. EIU’s Trae Anderson then moved up the floor with the intent of lane drive, but lost control of the ball, with it being tipped out of bounds with 0.8 seconds left. Cornell Johnston missed a potential game winner at the buzzer, sending it to overtime.

The two teams traded two-point buckets early in overtime before Jared Savage [5] nailed a long three from the left corner to give APSU an 84-81 lead with 2:09 left. But Riley drove the lane to cut the deficit to one with 1:52 left and then after the Governors missed on their next offensive possession, Davis fouled out of the game attempting to guard Riley, who this time made both free tosses to provide the Panthers a one-point 85-84 lead with 1:20 left.

The two teams then traded miss three pointers before Govs freshman Zach Glotta [3] missed a three with 13 seconds left. The Panthers Norman Luke snatched the rebound but while the Govs were attempting to slap the ball away, he was called for walking. Instead of going for a three this time, the Governors went for a two as Robinson drove the lane and was fouled on his shot attempt. He sank both shots to give the Govs the lead with 5.9 seconds left. That set up Riley’s heroics.

Riley, who came off the bench, finished with 18 points and seven assists but it was Trae Anderson who led the Panthers with 20 points while Cornell Johnston added 10. The Panthers, who came in as fourth worst OVC team in rebounding during league play, outrebounded the OVC’s best rebounding team 47-37, including 16 offensive grabs.

The Governors again struggled shooting-wise, making only 27 of 63 shots (43 percent), including only 7-of-25 from three-point range. The Govs also connected on only 25 of 39 free throw attempts—12 of 22 (55 percent) in the second half.

Austin Peay Governors are on the road Wednesday, January 27th to take on the Morehead State Eagles. Tip off is at 6:45pm.