Clarksville, TN – Austin Peay State University Associate Professor of Creative Writing Dr. Amy Wright is preparing for a busy 2016, as the poet, author and teacher will publish four collections of her writing, including her fifth chapbook, “Wherever The Land Is.”

A series of nonfiction essays comprised of the author’s research into work, loss, Emily Dickinson, and entomophagy, or the human consumption of insects, “Wherever The Land Is” explores a possible answer to humanity’s growing need for food sources. 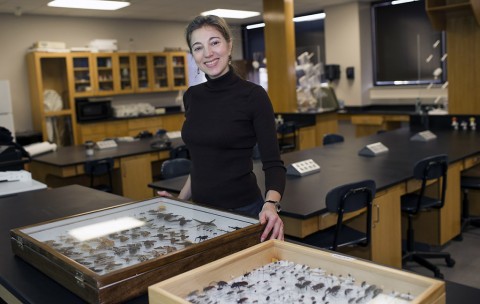 “I’d been doing a lot of research into human consumption of insects, because food sustainability is going to only become more of a problem for society,” Wright said. “As we move toward 2050, the human population is expected to be somewhere around nine or 10 billion people.”

Wright’s research into the study of insects also spawned a side project, as she intends to publish a second full-length poetry collection, titled “Everything in the Universe.” Set for release with Iris Press this spring, Wright said the poetry collection was sparked by her fascination with the insects she researched for her prose chapbook.

“As I was doing research, I grew interested in bugs and I began writing poetry about the biodiversity and different forms of communication I came across in my research,” Wright said.

Drawing inspiration from personal, as well as gathered tales of “local yodelers, spit turners and other holy mackerels,” Wright’s second poetry collection, “Cracker Sonnets,” to be published by Brick Road Poetry Press, is a tribute to the cultural identity of the American South.

“I was born in Southwest Virginia, and I began thinking about all the joys and concerns and preoccupations that not just I have, but humanity has in general,” Wright said. “And, where I’m from, many of those preoccupations are cultural. So as I began to embrace some of these aspects of my identity, I found that I had a lot of material with which I could work.”

A fourth, collaborative poetry collection is also in the works, titled “Creeks of the Upper South.” The collection represents a joint effort between Wright and William Wright, senior editor of the Southern Poetry Anthology.

Sharing a similar cultural and geographical upbringing, Amy Wright and William Wright set about researching the many regional waterways and aquacultures in need of protection throughout the American Upper South.

“I’m from Southwestern Virginia, and (William Wright) lives in Georgia now, so we both have an affiliation with and respect for the Appalachian region,” Wright said. “(William) came up with the idea to collaborate on ‘Creeks of the Upper South,’ and it’s been really nice having a project like this that I could pursue on the side.”

Amy Wright is the Nonfiction Editor of Zone 3 Press, the literary press of Austin Peay State University. Her writing appears in a number of journals including Kenyon Review, Southern Poetry Anthology (Volumes III and VI) and Tupelo Quarterly.

She was awarded a Peter Taylor Fellowship for the Kenyon Review Writers’ Workshop, an Individual Artist’s Fellowship from the Tennessee Arts Commission, and a fellowship to the Virginia Center for the Creative Arts (VCCA).

For information on APSU’s Department of Languages and Literature, visit www.apsu.edu/langlit [3]