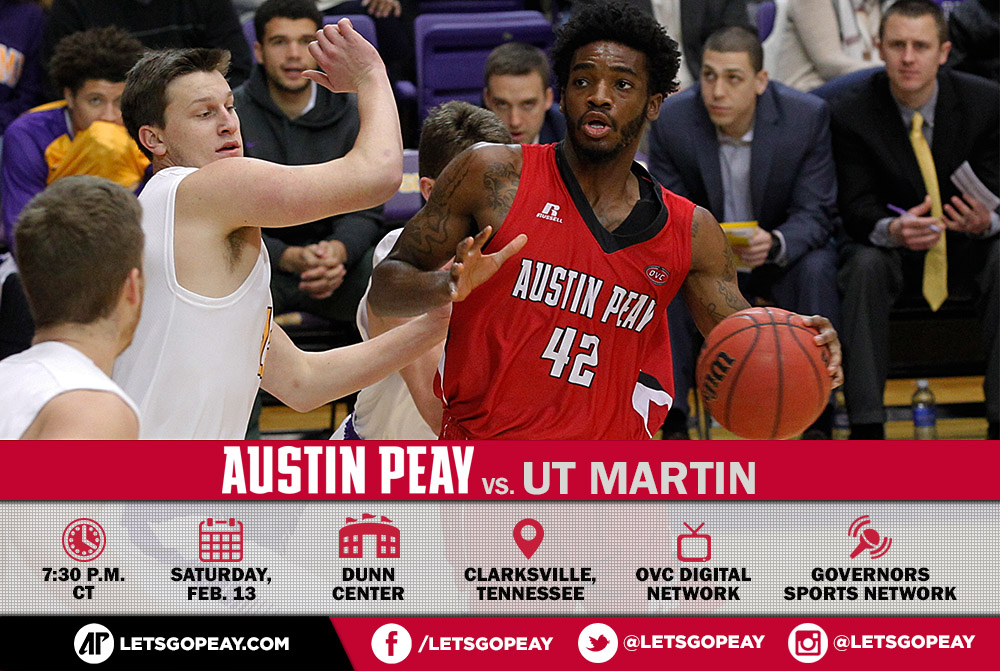 Clarksville, TN – After finding the right formula to win on the road, Austin Peay State University men’s basketball team hopes to use a similar recipe for success at home during the closing stages of the Ohio Valley Conference season. 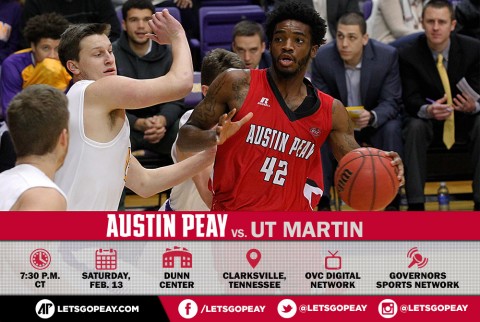 The Governors will play three of their final four contests at home. If the Govs are to qualify for the OVC tournament, the home games become extremely important to that quest.

First up will be UT Martin, 7:30pm, Saturday in a return match from a little more than a week ago, an 86-77 victory by the Skyhawks in Martin. It was a contest the Governors controlled much of the first half, but led by only one point at halftime. UT Martin opened the second half with an 8-0 run and the Governors never led again, although they made numerous runs.

Jacolby Mobley came off the bench to have a perfect shooting night, making all five field-goal attempts, including four three pointers, and all six free-throw attempts for 20 points. He was one of five Skyhawks in double figures, with preseason All-OVC selections Twymond Howard and Alex Anderson each scoring 17.

However, it was forward Kedar Edwards who perhaps had Skyhawks’ greatest impact with 11 points and 15 rebounds, eight on the offensive glass—Edwards have 21 rebounds against Southeast Missouri, Thursday night.

In fact, with Edwards leading the way, the Skyhawks out-rebounded the Governors 40-28 in the first matchup. Board dominance (42-27), including 15 offensive grabs, against Eastern Illinois was part of the Govs’ successful road formula—Chris Horton (19 points, 13 rebounds) and Kenny Jones (19 points, 10 rebounds) gave APSU its first double-dose of double-doubles in more than a year.

The Governors also have been able to get to the free-throw line 30 times in each of the last two games, making nearly 77 percent of those attempts, thanks largely to guard Josh Robinson, who made 23 of 27 in those two contests.

Offensive balance was a key at EIU as the Governors placed four player in double figures, with Khalil Davis enjoying perhaps his best OVC performance this season with 10 points, seven rebounds and six assists—four of the assists came in the second half as the Governors rallied from behind.

Defensively, the Govs also have displayed strong improvement in the last two games. They held Murray State to 42 percent second-half shooting, with key stops down the stretch allowing the Govs to come from behind.

APSU chose to make the Panthers beat them from the perimeter. They shot only 43 percent from the floor during the second half (EIU made just 8 of 28 three-point attempts for the game), again permitting the Govs to come from behind down the stretch.

Prior to the Wednesday, Eastern Illinois was the league’s hottest team, having won five straight. Now that mantra falls to the Skyhawks, who have won four straight and turned around a 2-5 OVC mark into knocking at the front door of OVC West lead.