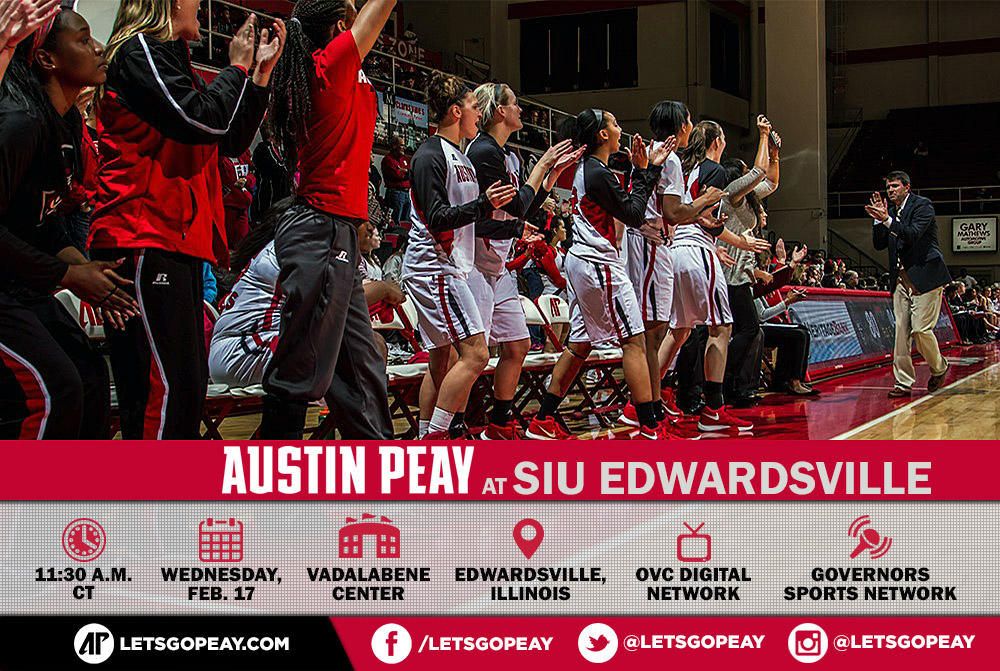 Edwardsville, IL – An 11:30am, Wednesday tipoff awaits Austin Peay State University women’s basketball team as it closes the road portion of its regular-season slate against SIU Edwardsville at the Vadalabene Center. 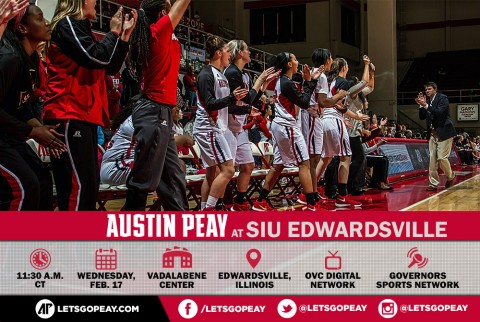 Austin Peay matched the Skyhawks shot-for-shot in an offensive-minded first half.

Senior guard Tiasha Gray used her game-high 29-point outing against UT Martin to claim a share of her third adidas® OVC Player of the Week honor, Tuesday. Gray went 10-of-22 from the floor and 8-of-9 at the free-throw line in the win against the Skyhawks. It followed her foul-ridden 13-point, 24-minute outing at Eastern Illinois, last Wednesday.

Saturday’s win helped Austin Peay break out of a four-way tie for sixth place and it is now tied for that spot with only Murray State entering this week’s action. The Govs now are in control of their own destiny toward its goal of qualifying for the OVC Women’s Basketball Championship. After Wednesday’s contest at SIUE, Austin Peay will play its final two games at home against teams it is battling in the standings.

SIUE brings an uncharacteristic two-game home losing streak into Wednesday’s contest. The Cougars had won six straight and were 8-1 at the Vadalabene Center before dropping an 85-79 decision to UT Martin, February 6th. The hangover from that loss lingered into a 79-76 loss, last Wednesday, to a surging Murray State squad.

Junior guard Shronda Butts has scored 20 or more points in four of her last five games, including 29 points against Murray State. She enters the regular-season’s final two weeks with an OVC-best 23.7 points per game in league action. Sophomore guard Donshel Beck is averaging just 11.8 points in OVC play but poured in a season-best 24 points against Murray State. It was the seventh time in her last eight games she has reached double-digit scoring territory.


Austin Peay enters Wednesday’s contest with its fate in its own hands after upsetting OVC leader UT Martin, 80-70, Saturday.

The Govs hold on a tournament spot is tenuous, but after Wednesday’s road contest APSU will play its final two games at the Dunn Center where they are 5-1 in OVC play this season.

Those home contests could prove pivotal as they will come against a Murray State team they are currently tied with and a Southeast Missouri team just one-game of it in the standings.

Facing one of the nation’s toughest nonconference slates (27th ranked) took its toll early as APSU averaged just 59.3 points per game against its 11 Division I opponents. It has popped the lid on its offense in conference action, averaging 73.2 points per game and reaching the 80-point plateau six times in OVC action.

During the nonconference portion of the schedule, Gray and Banks scored over 50 percent of APSU’s points. However, that percentage has declined in OVC play, with the duo averaging just 43.1 percent of the team’s scoring.