Devon Baulkman [1] paced the Vols with 19 points, going 7-of-15 from the field and 5-of-10 from the 3-point line. His seven made field goals tied a career high. Shembari Phillips [2] scored 16, while Armani Moore [3] added 10. South Carolina’s Duane Notice led the Gamecocks in scoring with 17 points. 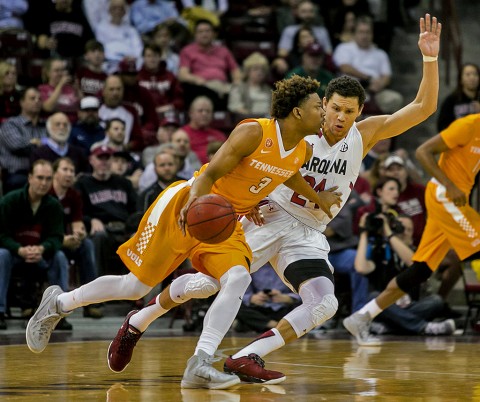 Trailing by as much as 25 in the second half, the Vols chipped away at South Carolina’s lead, going on a 14-2 run midway through the second half to cut the deficit to 13 at 61-48 with 9:20 remaining.

South Carolina’s offense hit on all cylinders in the opening half, shooting 59 percent on 19-of-32 shooting. The 19 made field goals are the most in half since South Carolina made 20 shots in the first half in an 81-63 win over USF on December 5th. The Gamecocks posted 49 points in the first half, marking the most first-half points they have scored in SEC play this season.

Despite falling in an 11-2 hole to open the game, Tennessee shot at a high clip in the early stages, beginning 11-of-17 (65 percent) from the field. However, the South Carolina zone stymied the Vols in the latter portion of the half and held Tennessee to 2-of-11 to end the half.

Baulkman led the Vols in scoring at the break with 14 points on 5-of-9 shooting. He went 4-of-6 beyond the arc and added three rebounds in the first half.

Freshman guard Shembari Phillips [2] got out to a quick start, scoring 11 points on 5-of-7 shooting in the first half. Phillips set career highs in points and field goals made, posting 16 points on 7-of-15 shooting on the night. In four of the last six games and in three of his five starts, Phillips has scored in double figures.

With leading scorer Kevin Punter [4], Jr., sidelined with an injury, Devon Baulkman [1] stepped up and scored 19 points, his second highest total of the season. Baulkman also tied his career high in field goals made, knocking down seven shots. He last hit seven shots vs. Gonzaga on December 19th, 2015. The senior guard also hit five field goals beyond the arc, marking his most three pointers since he made six vs. Gardner-Webb on November 22nd, 2015.

Tennessee will return to Knoxville for its second meeting of the season with the Arkansas Razorbacks on Saturday night. Tipoff is slated for 7:31pm ET/6:31pm CT on the SEC Network.

The Volunteers are 19-17 in the all-time series with the Razorbacks and owns a commanding 11-2 edge in Knoxville. In the first meeting of the season, Arkansas defeated Tennessee, 85-67, on its home floor. Three Vols–Kevin Punter, Jr., Shembari Phillips [2] and Armani Moore–scored in double digits.