Nashville, TN – Austin Peay State University’s stay in the 2016 Ohio Valley Conference tournament has seen the No. 8 seed Governors take down both the No. 5 and No. 4 seeds, Tennessee Tech and Tennessee State, respectively.

If the APSU Govs improbable run is to continue to the league championship game, they will have to take out No. 1 seed Belmont, 6:30pm, Friday, March 4th at Municipal Auditorium. 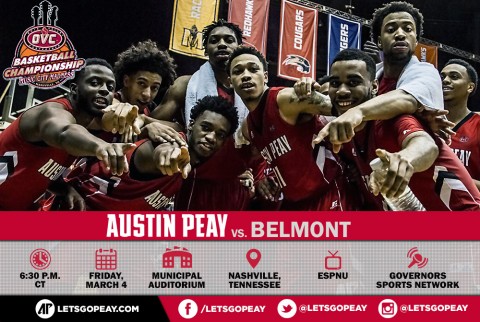 After shocking Tennessee Tech, 92-72, Wednesday night, the Govs used a remarkable comeback—they were down 19 points in the second half—to stun Tennessee State, 74-72, Thursday night, to move into the OVC tournament semifinals.

To gain an OVC finals berth the Governors will have to defeat a well-rested Bruins team that earned the tourney’s No. 1 seed and accompanying double-bye. The Bruins opened OVC play by running eight straight wins to gain an early advantage. The 4-4 record since was good enough to see them claim the OVC East and the league’s best overall record.

OVC Player of the Year Evan Bradds (17.3 ppg, 71% FG) is a superb presence inside while fellow All-OVC selection Craig Bradshaw (16.3 ppg) along with Taylor Barnette (10.5 ppg) compliment him well from the outside. All three are familiar with playing in important games as all were starters on last season’s team that stunned Murray State in the final, with Barnette hitting the game winner.

The contest also will see the league’s most veteran coaches—Dave Loos has been at APSU for 26 seasons while Rick Byrd has Belmont’s coach for 30 seasons—go head-to-head. Loos and Byrd’s history track back to the old Volunteer State Athletic Conference days when the former was at Christian Brothers.

In playing their third game in as many days, the Governors again will have to rely on their bench to provide depth. APSU received 22 points from the bench against Tennessee Tech and 17 more against Tennessee State as freshman forward Chris Porter-Bunton and junior guard John Murry particularly have been productive in Nashville. Murry scored the go-ahead three pointer with 24 seconds left.

After missing his first four of his first five free throws Thursday, Josh Robinson came up big in the closing 17 seconds, hitting five straight. He led the Govs with 17 points.

After his eye-opening 37-point, 21-rebound performance against Tennessee Tech, Chris Horton drew a lot of TSU attention, Thursday. He still finished with 15 points—12 in the second half—and 12 rebounds, his 23rd double-double this season.

Freshman guard Jared Savage also came up big down the stretch, knocking down two huge three pointers, and finished with 13 points in his fourth career start.

For the Govs to reach Saturday’s 5:00pm title game, they must improve at the free-throw line. The converted only 21 of 38 (55 percent) Thursday night.