Clarksville, TN – Alex Sheen has a young face, so when people see him walking around in a relaxed T-shirt, they don’t realize he was once a corporate executive for Hyland Software, an organization featured in Fortune Magazine’s Best Companies to Work For list. 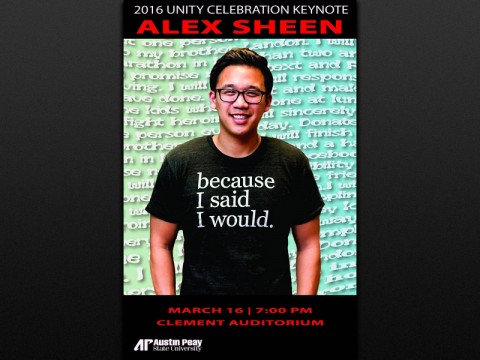 As the youngest manager in a global company with more than 1,500 employees, his career was pretty much set. Then, on September 4th, 2012, his father died of small cell lung cancer. Sheen started thinking about his father’s legacy.

“My father was a man of his word,” Sheen said. “He was there for me when I needed him.”

This realization led to the formation of Sheen’s globally recognized non-profit, “Because I Said I Would,” an organization that makes and keeps promises that encourage the betterment of humanity. At 7:00pm on Wednesday, March 16th, Sheen will visit Austin Peay State University to serve as keynote speaker for APSU’s annual Unity Celebration. The event is free an open to students, faculty, staff and the public.

Sheen has been featured on ABC World News with Diane Sawyer, Good Morning America, the TODAY show, Steve Harvey, CNN, The Los Angeles Times, NPR and many other programs. He speaks to audiences around the world about the importance of keeping a promise. Sheen spoke at more than 110 events in 2014, and he is a three-time TEDx closing speaker.

For more information about Sheen or the Unity Celebration, contact the APSU Office of Student Life and Engagement 931.221.7431.