Sioux Falls, SD – Behind a career night from Mercedes Russell, Tennessee will play for a spot in the Final Four after defeating Ohio State, 78-62, in the Sweet 16 at the Denny Sanford PREMIER Center Friday night.

In the midst of their best stretch of the season, the No. 7 seed Lady Vols (22-13) have won six of their last seven games to advance to the 28th Elite Eight in program history. Despite reaching the Sweet 16, Ohio State (26-8) finished the season losing four of its last seven.

Russell’s dominance throughout the game led to her best performance donning the orange, scoring a career-high 25 points on 12-of-16 shooting. She also collected 15 rebounds, matching a career-best.

Te’a Cooper (16), Bashaara Graves (14) and Diamond DeShields (10) all scored in double figures for the Lady Vols, while Ameryst Alston led the Buckeyes in scoring with 21 points. Tennessee’s starting frontcourt of Graves and Russell combined for 39 points.

Tennessee shot 50 percent from the field on 31-of-62 shooting and scored 50 paint points. Ohio State finished 22-of-67 (37 percent). The Lady Vols dominated the majority of the game, holding the lead for over 38 minutes and stretching the margin by as much as 22.

Despite playing from behind for much of the game, Ohio State trimmed Tennessee’s lead to seven after a 5-0 run midway through the third quarter. The Lady Vols responded with a 15-6 run over the final six minutes of the quarter, giving UT a 62-46 advantage entering the fourth. 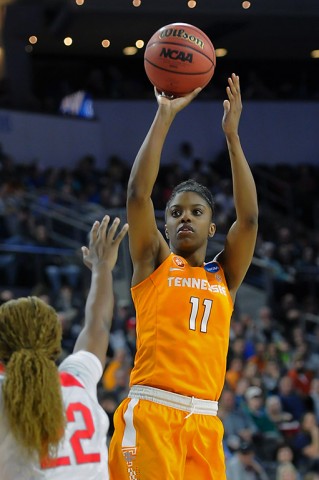 Despite poor shooting in the first quarter, Ohio State’s offense found its rhythm after a quick 6-0 run to start the second quarter. The Buckeyes cut the deficit to six in the frame before Tennessee stretched its lead.

Tennessee finished the first quarter with a 23-10 lead, holding the Buckeyes to 4-of-16 shooting in the first frame. The Lady Vols assisted on nine of 10 buckets in the opening quarter.

Similar to the Second Round game vs. Arizona State, Russell made her presence known early. Russell scored 10 of Tennessee’s first 12 points on 5-of-5 shooting to open the game against the Buckeyes. The 6-foot-6 center added four rebounds to go along with her 10 points in the first quarter. Graves added eight and Nia Moore scored two in the first quarter, giving UT’s bigs 20 of the 23 first-quarter points.

Head Coach Holly Warlick recorded her 108th career victory to put her in sole possession of seventh place for career victories by a NCAA Division I coach in their first four seasons as a coach. Warlick advances to her third Elite Eight in her first four NCAA Tournament appearances.

With 25 points and 15 rebounds, Mercedes Russell recorded the 11th double-double of the season tied with Mary Ostrowski for the third most double-doubles by a sophomore in a single season. Russell scored a career high 25 points surpassing her previous high of 20 vs. Central Arkansas on November 15th. Russell also tied a career best with 15 rebounds which she also recorded against Virginia Tech on December 6th.

Diamond DeShields tied a career high with seven assists against the Buckeyes. She has recorded seven assists three other times in her career.

By earning the start, Bashaara Graves tied Meighan Simmons (2010-14) for fifth amongst all Lady Vols with 127 career starts. Nia Moore played two minutes in her 100th appearance as a Lady Vol.

Tennessee posted back-to-back games of over 50 percent shooting for the first time since Jan. 23-30, 2014, against Florida A&M and Arkansas.

It was the Buckeyes second lowest scoring game of the season as they scored 56 in a loss to Connecticut on November 16th.

The Lady Vols scored 43 points in the first half, the second highest total of the season after the 63 points they scored over Central Arkansas in the season opener.

Tennessee shot a season high 60.7 percent from the field in the first half, the team’s previous best was .594 vs. Auburn on January 10th.

Tennessee will face No. 4 seed Syracuse in the Elite Eight Sunday on the ESPN family of networks.

The Orange pulled an upset in the Sweet 16, defeating No. 1 seed South Carolina, 80-72. Syracuse reached the Sweet 16 after taking down Army West Point and Albany (N.Y.) in the First and Second rounds.

Sunday’s Sioux Falls Regional Final will mark the second matchup of the season between the Lady Vols and the Orange. Tennessee defeated Syracuse, 57-55, November 20th, 2015. Graves posted a double-double with a team-high 16 points and 10 rebounds in the victory.