Nashville, TN – The Tennessee House of Representatives was pleased to welcome Mr. Masami Kinefuchi to attend Wednesday’s session of the House and to present him with a House Joint Resolution recognizing the great contribution he has made to the economy of Tennessee.

The consul-general’s job is to facilitate economic and cultural exchange between Japan and the United States. He has jurisdiction over five states—Arkansas, Kentucky, Louisiana, Mississippi, and Tennessee. In these five states, there are more than 400 Japanese companies.

In Tennessee there are over 180 Japanese-based business employing more than 46,000 individuals with the largest company being Nissan with an assembly plant in Smyrna, Tennessee. Other Japanese companies in Tennessee are Denso, Bridgestone, Calsonic, and Yorozu. 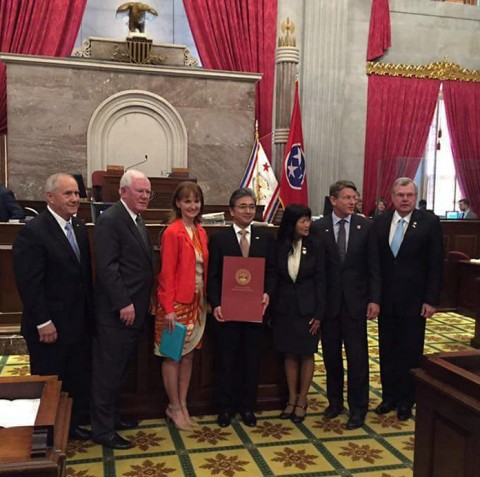 Rep. Curtis Johnson on the far right presented the House Joint Resolution to Mr. Kinefuchi (4th from left). Also, from the left is the governor’s chief of state, Jim Henry; House Finance Chairman, Charles Sargent; and Speaker of the House Beth Harwell.

So far this year, House Republicans have moved full steam ahead with multiple pieces of legislation designed to help military members and their families from across the state.

One of those bills, currently awaiting signature from Tennessee Governor Bill Haslam, will allow the five soldiers killed in the Chattanooga terrorist attack that occurred in July of last year to be eligible for the ‘Tennessee Fallen Heroes Medal.’ Currently, the medal is awarded to honor residents of Tennessee killed while serving on active duty or engaged in military support operations involving a conflict with an opposing foreign force. 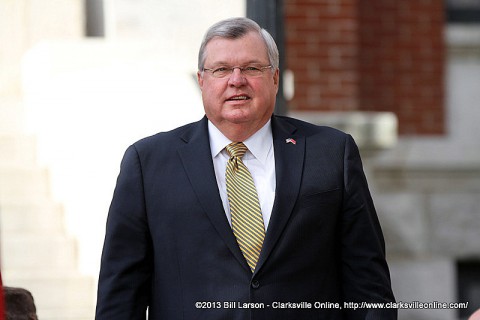 As passed, this new legislation expands on this criterion to also allow the honor to be bestowed on those military men and women killed on Tennessee soil during an attack specifically targeting service members.

The medal is awarded solely by the Governor or the Governor’s designee to the immediate survivor of the recipient.

Additionally, legislation passed the full House this week that will strengthen and make the Veterans Education Transition Support (VETS) program available to private, non-profit institutions of higher education throughout the state.

Passed in 2014, the highly successful VETS program encourages colleges and universities to prioritize outreach to veterans and successfully deliver the services necessary to create a supportive environment where student veterans can prosper while pursuing their education.

Currently, there are 13 public institutions that claim VETS Campus Certification. The certification recognizes and promotes schools that make veteran enrollment a priority. Higher education institutions that satisfy veteran-friendly criteria, such as specialized orientation and the availability of mentoring programs, can receive the designation.

Also on the veteran front this year is House Bill 1491, which will make it easier for veterans across the state to obtain a handgun carry permit. Under the legislation, a carry permit applicant would not be required to comply with the mandatory classroom and firing range hours if the applicant is an active, honorably discharged or retired veteran of the Unites States Armed Forces.

The person would have to present a certified copy of their certificate of release or discharge from active duty, a Department of Defense form 214 (DD 214), that documents a date of discharge or retirement that is within five years from the date of application for the permit. The legislation aims to eliminate an unnecessary burden on the state’s veterans in the permitting process.

Legislation to help support Post-Traumatic Stress Disorder (PTSD) counseling for combat veterans and their families is set to be heard next week before the House Finance, Ways & Means Committee. As introduced, the bill creates a specialty license plate which can be customized with a sticker to represent the veteran’s specific military branch with proceeds going to support these services.

Tennessee requires new specialty earmarked license plates to be subject to a minimum order of at least 1,000 plates prior to initial issuance. Any plate that does not meet the minimum order requirement within one year after passage of the authorizing act becomes invalid.

Under the bill, the money raised from these license plates is to be used exclusively in Tennessee to provide resources and support to veterans, service members, and their families, being equally allocated to Centerstone Military Services and SAFE: Soldiers and Families Embraced.

I was honored to have four young boy scouts to serve as pages for me during Thursday’s floor session. From Troop 503 which meets at the Bethel Cumberland Presbyterian Church, the four scouts were Thomas O. Gordon IV, Derek A. Clark, Benjamin Zirkle, and William Zirkle. Thomas, Benjamin, and William are boy scouts and Derek is a Venture scout. The boys did an outstanding job. 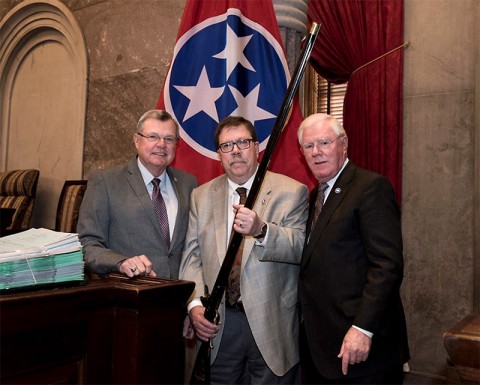 This 200-year old rifle was sold to Representative Art Swann’s great-great-great grandfather by frontiersman Davy Crockett around 200 years ago. Rep. Swann graciously shared it with members of the Tennessee General Assembly.

For more information about the Tennessee General Assembly, check our website at www.capitol.tn.gov [4]