Trailing by a single run after six innings, Austin Peay (21-13, 12-6 OVC) began its seventh-inning rally with one out on the board. 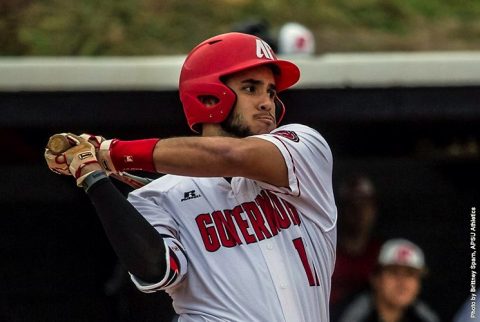 Third baseman Logan Gray [3] drove in the game-tying run with a sacrifice fly.

However, it was first baseman Dre Gleason [4]‘s two-run home run to left that gave APSU a 5-3 advantage. The Governors would tack on a key insurance run in the eighth when catcher Ridge Smith [5] hit a leadoff home run for a 6-3 lead.

Austin Peay’s bullpen made the late rally stand up with three pitchers combining to toss three scoreless, hitless innings to finish the game. First out of the pen, reliever Brett Newburg (2-0) retired a batter to end the sixth, but left two runners on base with one out in the seventh. After the Govs rally, Zach Neff [6] took the mound and induced a fly out and a fielder’s choice to end the threat.

Closer Jared Carkuff [7] took the bump in the eighth and would retire all six batters he faced for his season’s second save. He struck out the final two batters he faced to clinch the victory.

Austin Peay starter Caleb Powell [8] was left with no decision despite holding Belmont to one hit in the first five innings. He would get in trouble in the sixth as a Govs error extended the inning. The Bruins took advantage as catcher Clay Payne hit a RBI double to tie the game and center fielder Tyler Walsh hit a RBI single to give Belmont a 3-2 lead and end Powell’s outing.

[9]Copeland led Austin Peay with a 3-for-5 performance while Gray and Smith each added a 2-for-4 outing. Designated hitter Alex Robles [10] had the Govs first home run, his solo home run in the second part of a 1-for-3 day.

Belmont reliever Kyle Klotz (3-3) was tagged for two runs on two hits while recording two outs in the seventh inning. Walsh went 2-for-3 to lead the Bruins offense.