Cape Girardeau, MO – With the forecast of heavy rain over the weekend, Austin Peay State University will see its three-game Ohio Valley Conference softball series start at Southeast Missouri pushed up a day.

Originally scheduled for a Saturday-Sunday matchup, the Governors (7-34, 3-18 OVC) now will open play versus the Redhawks (13-30, 7-14 OVC) with a 2:00pm, Friday doubleheader at the Southeast Softball Complex, with the Saturday single game start time still to be determined with the weather trepidations. 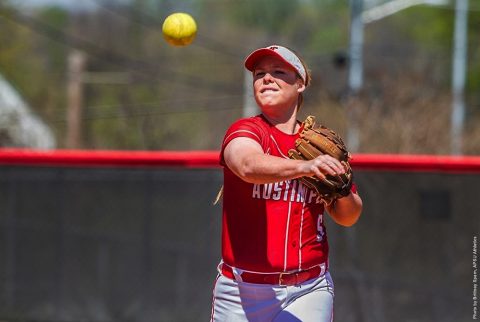 Check back at Austin Peay’s official athletic website www.LetsGoPeay.com [1] or on Twitter @AustinPeaySB for any announcements or further weekend schedule changes.

As for the matchup, the first game of this weekend’s series will be the 86th meeting overall between the two schools, dating back to their first meeting on March 3rd, 1989, with Austin Peay trailing in the all-time series, 65-20. Overall, the Austin Peay-Southeast Missouri series is the third-most played series in APSU history, only trailing the Tennessee Martin (106 games) and Tennessee Tech (92 games) series.

Offensively, Austin Peay is led by a pair of first-year players, with true freshman Danielle Liermann [2] and redshirt freshman Kacy Acree [3] putting up some of the best numbers in school history for newcomers. Liermann enters the weekend with a team-leading .374 batting average from the third-base position, with 52 hits, nine doubles, a triple and a team co-leading five home runs along with 30 RBIs. Her RBI and hit totals are both APSU freshman single-season records, while also tying for the eighth-most hits in a single season by any player and 11th most in RBIs.

Acree, APSU’s right fielder who missed last season after knee surgery, is hitting at a .341 clip, with 43 hits, including a team-leading 11 doubles, two triples and team co-leading five home runs. She also leads the team in runs scored with 27. Acree’s run total ties for the third most for a freshman in school history, while her doubles total is fourth most and home runs tie for third most. Her 11 doubles tie for the seventh-most by any APSU player in a single season.

In the circle, junior Autumn Hanners [4] leads the Govs’ pitching staff with a 3-14 win-loss mark, with a 4.53 ERA and 59 strikeouts in 89.2 innings of work this season. Senior Natalie Ayala [5] and juniors Allie Blackwood [6] and Christiana Gable [7] have also recorded wins for Austin Peay this season.