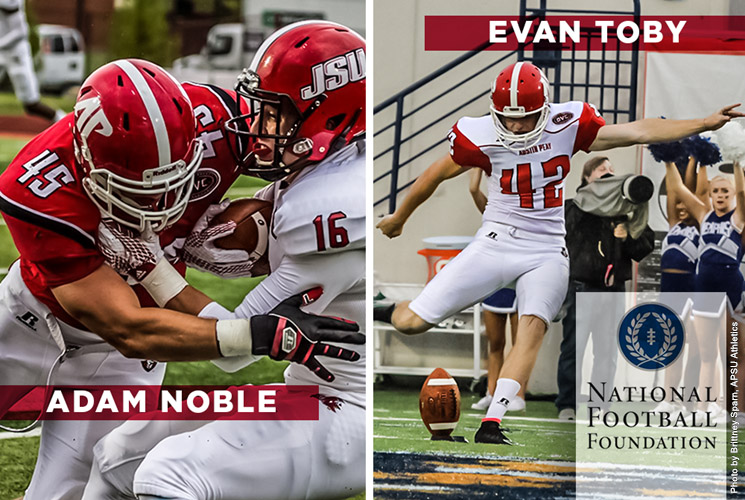 Linebacker Adam Noble and punter Evan Toby were among the record 868 players honored as the Society celebrates its 10th year. 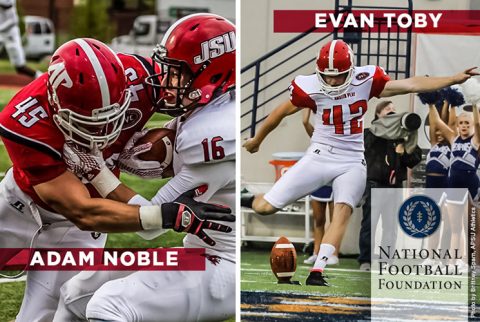 Austin Peay has had at least one student-athlete recognized in each of the Hampshire Society’s 10 years, one of 32 schools in the nation and 13 in FCS to do so.

Qualifications for membership in the NFF National Honor Society include: being a starter or a significant substitute in one’s last year of eligibility at a NCAA Football Bowl Subdivision, Football Championship Subdivision, Division II, Division III, or an NAIA college or university; achieving a 3.2 cumulative grade-point average throughout entire course of undergraduate study, and meeting all NCAA-mandated progress toward degree requirements.

Noble graduated last spring with a degree in criminal justice and homeland security and owns a 3.73 grade-point average. A two-time captain, Noble was a semifinalist for the 2015 William V. Campbell Trophy and CoSIDA Academic All-District. Toby, a business finance major with a 3.54 GPA, earned OVC Commissioner’s Honor Roll accolades in 2013-14 and 2014-15.

The duo are the 22nd and 23rd Governors to be honored since the award’s inception. The man Toby replaced as punter, Ben Campbell, was among a trio of Austin Peay honorees in 2015.

The 868 players honored in 2016 is a new high water mark, eclipsing the previous record of 838 honorees in 2014. The initiative has honored 6,620 student-athletes since its inception, and the program has experienced growth every year in either members or school participation since its launch in 2007.

Jon F. Hanson, the chairman and founder of The Hampshire Companies, provided the endowment to launch the NFF Hampshire Honor Society in 2007. He made the contribution as part of his legacy to the organization after serving as NFF chairman from 1994-2006. He currently serves the organization as a chairman emeritus. Each player awarded with membership in this year’s Honor Society will receive a certificate commemorating their achievement.

The Hampshire Honor Society represents a powerful component in the organization’s rich history as an innovator in promoting the scholar-athlete ideal, which began in 1959 with the NFF National Scholar-Athlete Awards.

Launched with a donation from Hall of Fame coach Earl “Red” Blaik, the NFF National Scholar-Athlete Awards, presented by Fidelity Investments, became the first initiative in history to grant postgraduate scholarships based on a player’s combined academic success, football performance and community leadership. Since its inception, the NFF National Scholar-Athlete Awards program has awarded $10.9 million to 816 top scholars and community leaders.