Clarksville, TN – The U. S. Army Corps of Engineers Nashville District and the city of Clarksville celebrated the completion of the Riverside Drive Stream Bank Stabilization Project during a ceremony at Freedom Point in Liberty Park.

Murphy welcomed the crowd and said the project would serve to stop erosion of the riverbank and protect a nearby structure and roadway.

“I am happy to be here and I would like to thank everyone who had a hand in the success of this project,” said Murphy.

The city of Clarksville and the Corps of Engineers collaborated to stabilize 1,530 feet of eroded bank on the Cumberland River alongside Riverside Drive to protect businesses along Riverside Drive, utilities and the Old Waterworks building, a local well-known historic landmark built in 1927. 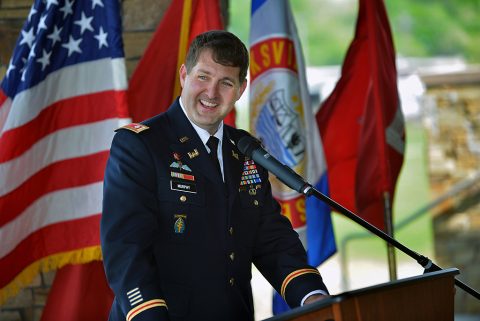 “I am so excited about this project and the work that has been done,” said Clarksville Mayor Kim McMillan. “This project is vitally important for several reasons including economic development, environmental concerns and to protect the integrity of this critical road.”

Bank erosion threatened to undermine Riverside Drive, underground sewer lines, power poles, storm water drains, a guard rail, and a historic building. If left unprotected the Riverside Drive could have failed and posed danger to life and safety, and impacted the city and local businesses situated along the roadway. 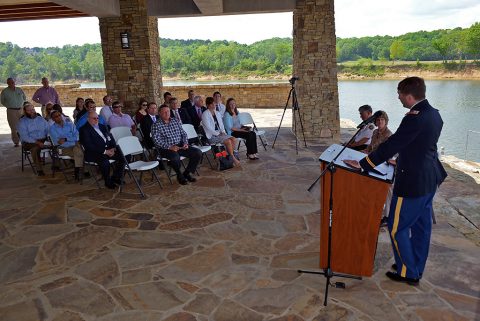 “This was a great investment for the community and city of Clarksville,” said Ramune Matuliauskaite-Morales, U.S. Army Corps of Engineers Nashville District Planning project manager. “There would have been a major impact in having to make an alternate road or even move the road away from the river.”

Choctaw Transportation Inc., completed the project three months ahead of schedule. The $2.3 million project began in January 2016 and consisted of repairing eroding bank along the Cumberland River. The contractor added five feet of clay and rock to reinforce the stream bank.

Crews cleared and prepared the site and used barges equipped with backhoe tractors to place a layer of geotextile fabric and riprap with limestone rock to stabilize the eroding bank.

The estimated loss and relocation costs for all endangered facilities would have been $6.3 million. The federal government paid 65 percent and the city of Clarksville the remaining 35 percent in cost sharing the project. The overall cost of the project is more than $2.3 million, and the grant that the city received from the federal government pays more than $2.1 million of it.

McMillian said the city of Clarksville benefitted from its partnership with the Corps of Engineers in being able to stop the erosion at this location. 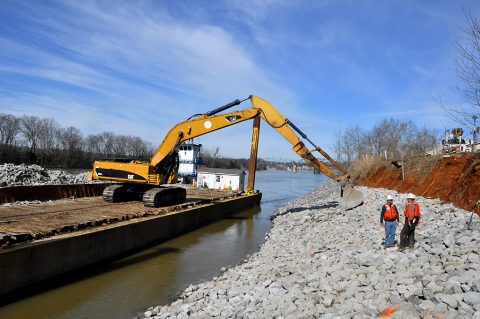 “We cannot do it alone in ourselves because the Cumberland River is important to the city of Clarksville, so that’s where the Corps comes in,” said McMillian. “The U.S. Army Corps of Engineers has been a great partner to us and we are happy about this project and collaborating in future projects with them,” said McMillian.

Because the Nashville District partners with local communities to find solutions to problems like this one, Murphy said, “We were excited to see this project funded and able to deliver a project that reduces the risks and consequences of continued erosion.”