Clarksville, TN – Reliever Zach Neff [1] held the door for a comeback open with 4.1 scoreless innings, but Austin Peay State University’s baseball team could not get a key hit down the stretch and dropped a 9-7 Ohio Valley Conference decision to UT Martin, Saturday night at Raymond C. Hand Park. 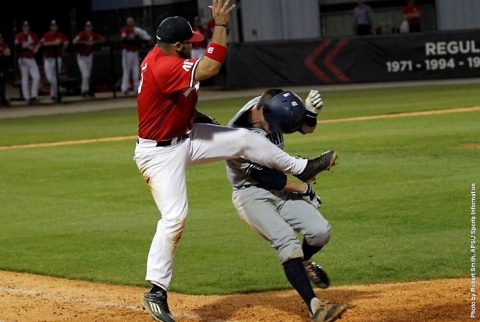 The Skyhawks got three hits with two outs, capped by third baseman Ryan Helgren’s three-run home run, to build a four-run lead before the Govs came to the plate.

Austin Peay (28-16, 17-9 OVC) threatened to put together its own big inning in the bottom of the first, tagging Skyhawks starter Dom Bazzani for four straight hits to start the outing. Third baseman Logan Gray [3] and right fielder Chase Hamilton [4] each had RBI base hits to halve the deficit, 4-2.

But the Govs saw a bigger inning snuffed out as catcher Ridge Smith [5] lined unluckily into a double play, Helgren snagging the line drive and falling on third to catch Gray out. Bazzani then escaped the inning with a flyout.

Left fielder Kyle Blackburn [6] would nudge the Govs to within a run, 4-3, with his one-out solo home run in the third. But the Govs could not get closer in the frame or the next, leaving a runner on base each time.

The Skyhawks pieced together another two-out rally in the fourth. Costanzo struck out the first two batters he faced, but a third out proved elusive. The Skyhawks put the next five batters aboard safely, including three straight RBI singles, to build a 7-3 lead.

Austin Peay roared back in the bottom of the fourth. Blackburn started the scoring with a double to right field. Three batters later, Gray would add his own double to drive in two runs. Hamilton followed with the Govs third double of the frame to tie the game, 7-7. However, the Govs could not take the lead, leaving Hamilton stranded at second.

UT Martin broke the tie quickly with a two-run fifth inning. The Skyhawks cashed in a one-out walk when Helgren doubled into the right center gap, breaking the tie. Two batters later, shortstop Josh Hauser added a run with a two-out single that ended Costanzo’s outing.

The Govs turned the ball over to southpaw reliever Zach Neff [1] who promptly shut the door in the fifth. Neff then twirled four addition scoreless innings, facing just two batters more than the minimum through his 4.1-inning outing.

Neff’s outing provided the Govs the opportunity to make their comeback try, but they could not capitalize. Austin Peay would leave a runner in scoring position in each of the final three innings as UTM reliever Alex Evans (7-5) worked around four hits in his five scoreless innings to pick up the win.

Austin Peay ended the game with just four hits in 16 opportunities with a runner in scoring position. That included one hit in four appearances with a runner on third with less than two out – the lone hit coming on Hamilton’s single in the first inning.

[8]Helgren led UTM’s 11-hit attack with a 3-for-4, four RBI performance that included a double and home run. First baseman Nick Pribble added a 2-for-5, one RBI outing.

The Govs finished with 13 hits as Hamilton and first baseman Alex Robles [9] each finished with three hits. Gray knocked in three RBI in his 2-for-4 outing while Blackburn chipped in a pair of runs as part of a 2-for-5 night at the plate.

Costanzo (6-4) suffered his first home loss after starting the season 6-0 at Raymond C. Hand Park. He surrendered nine runs on 10 hits in 4.2 innings.

The rubber game of the three-game OVC series between Austin Peay and UT Martin will start at 1:00pm, Sunday.