New report reveals money-saving strategies to help couples to save money and still wed in style.

Yonkers, NY – It’s a day many dream about their whole lives and the $60-billion-a-year wedding industry knows just how to stoke expectations and drum up sales.  While many couples have a limit on what they plan to spend on their wedding, a new Consumer Reports survey found that many of them go over budget, with some even dipping into savings and retirement accounts to pay for the occasion.

Consumer Reports National Research Center surveyed 464 Americans who’d had a wedding reception in the last five years; 78 percent of those newlyweds reported they had budgeted for their reception. 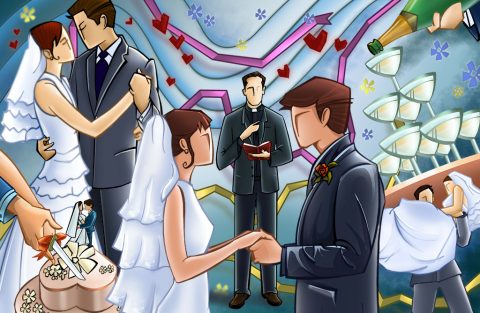 Consumer Reports’ secret shoppers find that some vendors charge a “wedding surcharge” for products and services.

But almost two-thirds of those who went over budget said they had overspent by at least 20 percent.

To afford the bill, 41 percent said they withdrew from savings; 11 percent took out a loan from a bank or credit union; and 9 percent, all under age 50, withdrew some money from a 401 (k) or 403(b), or IRA – a move that can trigger a tax penalty and be a potential threat to savings.

What Consumer Reports found when it sent its secret shoppers out to determine whether couples planning a wedding are being overcharged may explain why some people may go over their budgets.

Pairs of shoppers called the same photographers, florists, limousine services, caterers and other party vendors at least a week apart and got comparative estimates for a wedding and a 50th anniversary party that were identical in every other respect.  They gathered prices from 40 vendors in 12 states. Among the results that could be compared, vendors quoted higher prices for the wedding than for the anniversary party in more than a quarter of the cases.

Among the findings uncovered by Consumer Reports secret-shopper investigation were built-in wedding-based gratuities up to 26 percent and a $7.00 per person cake-cutting fee buried in some caterers fine print; photographers who inflated their prices because the affair was a wedding; and limousine companies that priced bridal packages higher than other, comparable services.

“If you’re planning a wedding, you need to be aware that you may be paying a premium for products and services in some cases,” said Tobie Stanger, senior editor at Consumer Reports. “You may not think to bargain, but you should. While our findings aren’t enough to indict an entire industry, they’re a warning to wedding shoppers to read fine print, ask smart questions, and negotiate before signing anything.”

The full report, “Get More Wedding for Your Money,” appears in the June 2016 issue of Consumer Reports and online at ConsumerReports.org [1]. In addition to the survey and secret shopper investigation, the article also features 31 money-saving strategies, advice on avoiding wedding-shopping gotchas, what to spend on a dress, wedding planner costs, and how much guests should give as a gift.

How to Get More Wedding for the Money

According to The Wedding report, Americans now spend an average of $27,000 on a wedding, but there are ways to keep a lid on costs.   Below are some money-saving strategies that were uncovered:

Consumer Reports is the world’s largest and most trusted nonprofit, consumer organization working to improve the lives of consumers by driving marketplace change. Founded in 1936, Consumer Reports has achieved substantial gains for consumers on health reform, food and product safety, financial reform, and other issues. The organization has advanced important policies to cut hospital-acquired infections, prohibit predatory lending practices and combat dangerous toxins in food.

Consumer Reports tests and rates thousands of products and services in its 50-plus labs, state-of-the-art auto test center and consumer research center. Consumers Union, a division of Consumer Reports, works for pro-consumer laws and regulations in Washington, D.C., the states, and in the marketplace.