Port Arthur, TX – A bright yellow sign with the words “convoy follows” sits in the front of a Light Medium Tactical Vehicle as about twenty more vehicles follow behind it.

The SEDRE, directed by U.S. Army Forces Command, tested the 101st Abn. Div. Sust. Bde. on their ability to rapidly deploy to an expeditionary environment.

Simultaneously exercising the brigade’s mission essential tasks to ensure they are maintaining proper levels of readiness.

With U.S. Naval Ship Benavidez not scheduled to arrive until Monday, Soldiers took full advantage of the extra days to establish their operations and marshalling area.

The operations center allowed the battalion and brigade to track what was coming off the vessel and into the marshaling area.

“We got on the ramp at around 7:00pm on Monday,” said Staff Sgt. Juan C. Davilamercado, the noncommissioned officer in charge for the team from 372nd Inland Cargo Transfer Company, 129th CSSB. “We began to bust all the chains holding down the vehicles and began to download the equipment. The Soldiers from “Deuce Train” were extremely eager to work and continue working even when it was time to get some rest.”

The 372nd ICTC and 613th Movement Control Team, 129th CSSB, were the teams in charge of downloading the vessel along with sailors from the Navy Cargo Handling Battalion-One.

Soldiers and sailors had a safety brief prior to unloading the vessel, which included some of the unique procedures for working on a navy vessel. The safety brief involved traffic flow, hydration, uniform standard during the mission as well as proper use of road guards.

Sgt. Marsha Feightner said that with so many Soldiers participating in the download they had to break down into smaller teams to keep better accountability.

“Everyone’s morale was pretty high and still is,” said Spc. Mason Lewis, a cargo specialist with 2nd platoon, 372nd ICTC. “Being able to experience something new and work with the Navy to accomplish the same mission was awesome.”

Fifteen hours after the vessel lowered its ramp at Port Arthur, TX, it was completely downloaded. 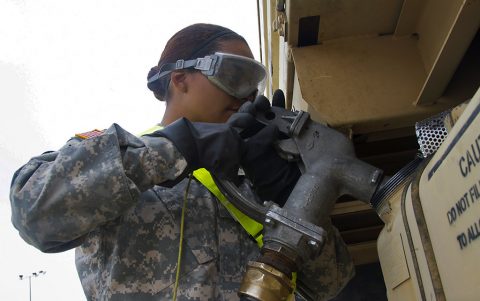 “Some of the Soldiers in 372nd had prior experience in a mission similar to this exercise,” said Coleman. “During our deployment to Liberia we had to load and unload a vessel with our equipment. Then in October of last year during our JRTC (Joint Readiness Training Center) rotation we were able to train on running a LSA (Logistic Support Area) as well as downloading and unloading equipment except without a vessel.”

With the vessel now downloaded, the Lifeliners linked up with members of Joint Task Force-Port Opening to enter the next stage of their mission. 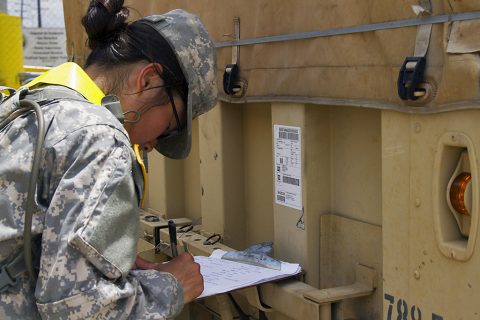 The equipment now handed over to the Lifeliners; it was time to stage some vehicles.

“At least one Soldier from the 372nd and 613th were licensed on every vehicle downloaded from the vessel, which made it easy for the Soldiers to move it from the staging area on the port to the marshalling area,” said Coleman.

The 613th MCT took charge of accountability, staging and making sure 3rd BCT Soldiers had everything ready for their journey to Fort Polk, LA.

“Each vehicle was staged by battalion once they arrived to the marshalling area,” said Feightner. “This would make it easier once the 3rd brigade Soldiers arrived. All they would have to do is get in the vehicle and convoy out to Fort Polk.”

MCT Soldiers would immediately check each vehicle bumper number upon their arrival and hand off the vehicle to the road guard waiting at the first orange cone at the marshalling area. The road guard would then direct the driver to the vehicles specific lane.

Before the 3rd BCT Soldiers took off on their convoy the MCT team made sure they had the proper paperwork and understood the route and alternate route to Fort Polk.

However, not all equipment loaded on the vessel was easily mobile like vehicles. This is where the Soldiers from 594th Transportation Company, 129th CSSB, came in.

“Equipment such as containers are called TEUs (twenty-foot equivalent units of equipment),” said 2nd Lt. Logan Oakley, the first platoon leader out of 594th Trans. Co., 129th CSSB. “We load the TEUs onto our M915’s (Line-Haul Tractor) and line haul from Port Arthur to Fort Polk. We notify our 3rd BCT point of contact that we are on our way, so when we get there they are ready to receive their equipment.”

It took a total five convoys to get the Soldiers of 3rd BCT transported with from Port Arthur, TX, to Fort Polk, LA.

Lifeliners were not just able to exercise their capabilities but they also participated in a historic event for the SDDC. This was the first SEDRE the SDDC participated in over 15 years.