From May 13th-16th, more than 600 Soldiers and 20 units from Tullahoma’s 30th Troop Command completed a series of grueling disaster preparedness exercises throughout Middle Tennessee testing the Guard’s ability to provide military assistance in the event of a catastrophic emergency. Soldiers worked alongside many state and local emergency agencies designed to test the abilities of all involved. 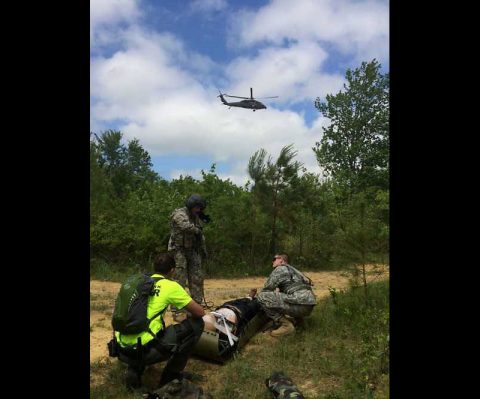 Soldiers of the Tennessee Army National Guard work with a Tennessee State Park Ranger to prepare a crash victim for extraction and transport to an area hospital. This was one of multiple simulated events as part of Tennessee Maneuvers 2016. (Clint Derryberry with Maury County Search and Rescue)

According to Haston, the Tennessee Guard’s mission “is to support state wide emergency management by bringing together local civil authorities, under the coordination of the Tennessee Emergency Management Agency, and provide military response resources in the event of a catastrophic emergency.” And that is exactly what the Tennessee National Guard did.

After mobilizing and deploying the Guard force to Tullahoma, the Soldiers started the exercise by conducting aerial and route reconnaissance to determine open roads for evacuation of the local population.

Then, utilizing 15 Guard aircraft and hundreds of Soldiers, the Guard worked with the Tullahoma Fire Department conducting a mass evacuation of critical patients (played by role players) from the Harton Regional Medical Center. The patients were then airlifted by Blackhawk helicopter from the Tullahoma Regional Airport to other hospitals. 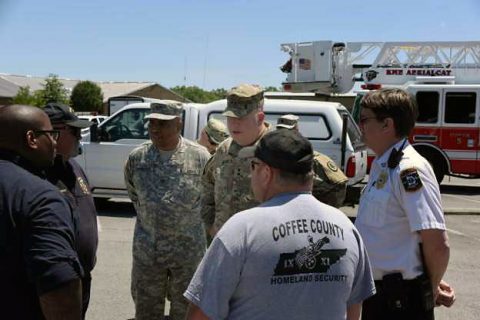 “In the wake of a simulated long term power outage, our Soldiers assisted hospital staff in moving patients to a half dozen other hospitals in middle Tennessee with some patients being flown as far as Nashville, Chattanooga, and Northern Alabama,” said Maj. Dallas Clements, Training Officer for 30th Troop Command.“We’re very excited that our Soldiers got the chance to work with other first responders and train to better care for the citizens of Tennessee.”

At South Cumberland State Park, Soldiers from the 1-181st Field Artillery Battalion, based in Chattanooga, were airlifted into and worked alongside state park rangers conducting search and rescue operations for a simulated crashed ultralight aircraft with pilot and passenger. More than 100 Soldiers and reconnaissance aircraft spent the day scouring more than 20,000 acres of rugged, wooded terrain, eventually finding the crash site and rescuing the victims by hoisting them out by aircraft.

“This part of the exercise was a great opportunity to work with our state park rangers and test our search and rescue skills,” said Clements.

There were also many other elements to the exercise and Soldiers stayed highly motivated throughout it. Spec. Demarcus Moore from Chattanooga’s Forward Support Company, 1-181st Field Artillery Battalion (HIMARS), said that the exercise gave him “a bigger sense of purpose by bringing what we do into perspective. I now know I can make a difference.” Units also conducted damage assessments, reconnaissance, search and rescue, MEDEVAC, and established points of distribution as well as entry control points for follow on forces.

At the exercise’s conclusion, Col. Milton Thompson, commander for 30th Troop Command said, “For the past 10 to 15 years, we’ve focused primarily on our federal war-time mission. This disaster preparedness exercise gave us a great opportunity to train our Soldiers on our state mission.”

Thompson also said, “Working side by side with our local partners created relationships where our Soldiers and first responders shared knowledge and experiences that enhanced our capabilities.”