Nashville, TN – Daniel Mengden continued his torrid stretch and delivered seven stellar innings to lead the Nashville Sounds to a 2-1 win over the Sacramento River Cats in front of 5,492 fans Friday night at First Tennessee Park.

It’s the sixth consecutive win for the Sounds who are now three games above .500 at 22-19 and sit in first place in the American South Division. They’ve won eight of their last nine games at home. 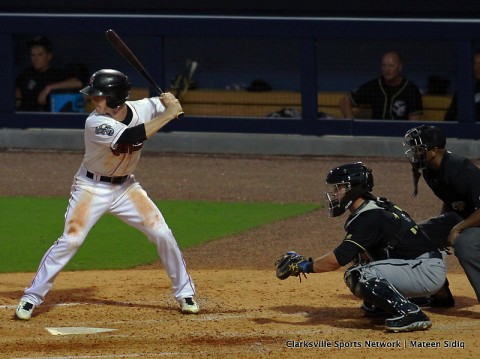 He dealt with two base runners in each of the first two innings but used three strikeouts to escape with no damage.

Nashville jumped out to a 1-0 lead when Josh Rodriguez drew a bases loaded walk against Sacramento starter Chris Heston in the second.

In the fourth, Rangel Ravelo boosted the lead to 2-0 when he launched a solo homer to left-center. It was Ravelo’s second home run of the season.

It was more than enough offense for Mengden who retired seven straight in the middle innings before Ryan Lollis started the sixth with a base hit to right field. Two batters later, Mac Williamson lined a double down the left field line that chased Lollis all the way around to cut the deficit to 2-1.

Mengden bounced back and retired the final five batters he faced after the double. He finished his night with back-to-back strikeouts to close the top of the seventh.

Patrick Schuster took over for Mengden in the eighth and delivered a 10-pitch, 1-2-3 inning to preserve the 2-1 lead.

Schuster handed over to J.B. Wendelken in the ninth and the right-hander made quick work of the River Cats. He retired the side in order and pumped a fastball past Mitch Delfino to end it.

Game three of the four-game series is set for Saturday night at First Tennessee Park. Right-hander Chris Smith (2-5, 4.40) starts for the Sounds against left-hander Ty Blach (5-3, 3.57) for the River Cats. First pitch is scheduled for 6:35pm.

The 2016 season is the Sounds’ 19th year in the Pacific Coast League and their second as the Oakland Athletics’ top affiliate. Tickets are available now by calling 615.690.4487 or by visiting www.nashvillesounds.com [1]