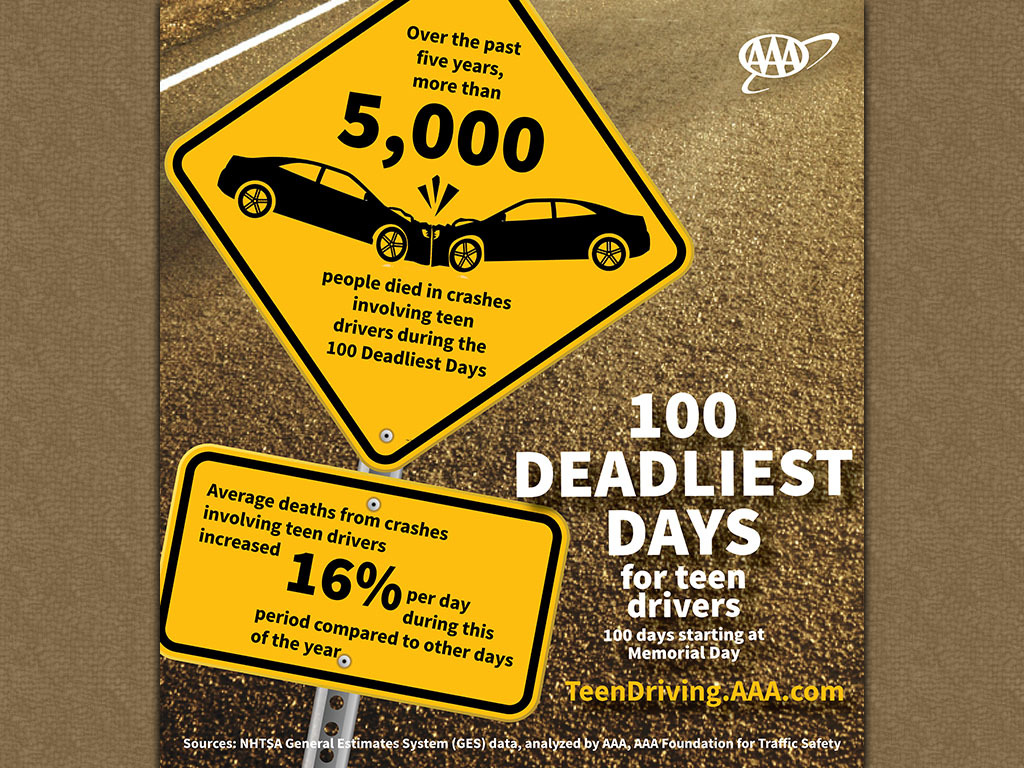 Knoxville, TN – Over the past five years, more than 5,000 people have been killed in crashes involving teen drivers during the “100 Deadliest Days,” the period starting at Memorial Day when teen crash deaths historically climb.

As the summer driving season begins, the AAA Foundation for Traffic Safety is releasing a follow-up study confirming that nearly 60 percent of teen crashes involve distractions behind the wheel. 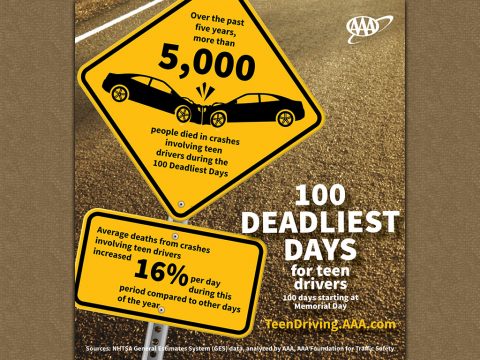 The research also finds a disturbing trend showing that texting and social media use are on the rise amongst teen drivers.

Crashes for teen drivers increase significantly during the summer months because teens drive more during this time of year.

Over the past five years during the “100 Deadliest Days”:

This year’s new follow-up report from the AAA Foundation is part of the most comprehensive eight-year research project ever conducted into crash videos of teen drivers. In collaboration with researchers at the University of Iowa, the AAA Foundation analyzed the moments leading up to a crash in more than 2,200 videos captured from in-car dash cameras.

The latest report compared new crash videos with those captured from 2007 -2012 and found consistent trends in the top three distractions for teens when behind the wheel in the moments leading up to a crash:

“Every day during the summer driving season, an average of 10 people die as a result of injuries from a crash involving a teen driver” said Jurek Grabowski, Research Director for the AAA Foundation for Traffic Safety. “This new research shows that distraction continues to be one of the leading causes of crashes for teen drivers. By better understanding how teens are distracted on the road, we can better prevent deaths throughout the 100 Deadliest Days and the rest of the year.”

Researchers also found that how teens use their cell phone when behind the wheel changed significantly over the course of the study.  In the moments leading up to a crash, teens were more likely to be texting or looking down at the phone than talking on it. This supports findings by Pew Research Center, which shows text messaging has become a key component in day-to-day interactions amongst teenagers. Fifty-five percent of teens spend time every day texting, sending an estimated 80 text messages per day.

“It’s no secret that teens are extremely connected to their cell phones,” said Don Lindsey, Tennessee Public Affairs Director, AAA – The Auto Club Group. “Many teens are texting or using social media behind the wheel more often than in the past, which is making an unsafe situation even worse.”

Research by the Virginia Tech Transportation Institute found that texting creates a crash risk 23 times worse than driving while not distracted. A recent AAA Foundation survey shows that nearly 50 percent of teen drivers admitted they had read a text message or email while driving in the past 30 days. NHTSA’s National Occupant Protection Use Survey also shows that from 2007 to 2014, the percentage of young drivers seen visibly manipulating a hand-held device quadrupled.

“Nearly two-thirds of people injured or killed in crashes involving a teen driver are people other than the teen themselves,” continued Lindsey. “This shows that teen drivers can be a risk to everyone on the road and it is important to regulate their actions when behind the wheel.”

Keeping cell phones out of the hands of teen drivers is a top priority for AAA. The Association’s advocacy efforts are helping to protect teens by working to pass graduated driver licensing laws and teen wireless bans in states across the country.

In preparation for the “100 Deadliest Days”, AAA encourages parents to educate their teen about the dangers of distracted driving and monitor their actions behind the wheel.  Parents should:

TeenDriving.AAA.com has a variety of tools to help prepare parents and teens for the dangerous summer driving season. The online AAA StartSmart program also offers great resources for parents on how to become effective in-car coaches as well as advice on how to manage their teen’s overall driving privileges. Teens preparing for the responsibility of driving should enroll in a driver education program that teaches how to avoid driver distraction and other safety skills.

Established by AAA in 1947, the AAA Foundation for Traffic Safety is a 501(c)(3) not-for-profit, publicly-supported charitable research and educational organization. Dedicated to saving lives and reducing injuries on our roads, the Foundation’s mission is to prevent crashes and save lives through research and education about traffic safety. The Foundation has funded over 300 research projects designed to discover the causes of traffic crashes, prevent them and minimize injuries when they do occur.