Baghdad, Iraq – Lt. Col. David Bowlus became the 101st Airborne Division (Air Assault) chaplain. Bowlus said that the very next day he had the privilege of providing the prayer at Maj. Gen. Gary J. Volesky’s change of command ceremony, welcoming him as division commander. From that point on, Bowlus worked closely with Volesky and Division Unit Ministry Teams to maintain the spiritual fitness of the Division’s Soldiers.

“It’s part of readiness, and I can’t think of a better coach, mentor and friend that I’ve had that’s been able to help me see what we need to do at our level to help that mission,” said Volesky, commander, 101st and the Combined Joint Forces Land Component Command – Operation Inherent Resolve. 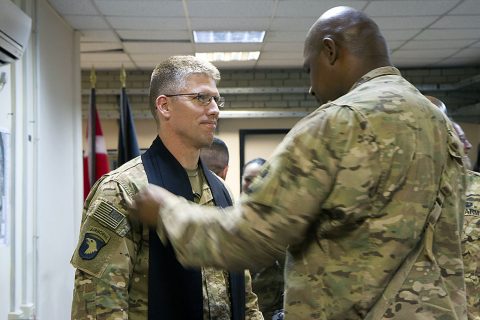 Nearly two years later, and amidst the division headquarter’s deployment to Iraq in support of Operation Inherent Resolve, Bowlus passed his duties as the chaplain of the 101st and CJFLCC – OIR to Lt. Col. Anthony Taylor during a change of stole ceremony May 30th at Union III.

The use of a stole, a long, scarf-like collar, dates back to the Roman Empire. It is suggested to have origins in Jewish traditions. The stole in the 101st has a deep history as well. On the back of the black stole are 16 embroidered names of division chaplains dating back to 1988 and campaign ribbons going back to the Normandy invasion during World War II.

Bowlus took on that responsibility after coming to Fort Campbell two years ago after serving for two years as command chaplain of the U.S. Office of Military Support in Washington, D.C.

Before that, Bowlus started his military career as an armor officer. Later, with the support of his wife, he resigned from the military and attended seminary before re-commissioning in 2002 as a chaplain.

The change of stole ceremony took place on Bowlus’s 23rd wedding anniversary. He said even though he couldn’t spend his anniversary with his wife, there wasn’t a bitter bone in her body.

“I think it just really made me appreciate the blessing of my wife and my kids and their partnership in this calling,” said Bowlus.

During his time as a Screaming Eagle, Bowlus has been on two deployments. The first one was to Liberia to fight Ebola, and the second was the division’s current deployment to Iraq. Bowlus returned home to his wife exactly 101 days after he left home for Iraq – a fitting number for a proud member of the 101st.

“As I leave, I leave a Screaming Eagle to the core,” Bowlus said. “I really love the division. I’ve got so much admiration and respect for the history, for the Soldiers and the great leaders.”

After taking some time off with his wife and kids, Bowlus will spend the next year at the Army War College in Carlisle, Pennsylvania.

Chaplain Taylor comes to the 101st from the 3rd Armored Brigade Combat Team, 1st Cavalry Division in Fort Hood, Texas. He has been an Army chaplain for the past 16 years.

“I’m blessed to serve in the United States Army as a chaplain,” Taylor said. “I get to encourage, motivate, inspire and provide space and grace for people to live out their call to God.”

Taylor is a former Screaming Eagle who served as the 101st Division Family Life Chaplain from 2012 to 2014.

It is an honor to return to the 101st as the division chaplain, Taylor said.

In his remarks at the ceremony, Taylor spoke about a scripture that says some plant, some water and God gives the increase.

“So Dave Bowlus has planted,” said Taylor. “My intent is to water – to do as much watering around here spiritually as I can. My door is open, and my prayer is that I will be approachable enough that each and every one of you will be able to approach me anytime.”