The fish weighed 18 pounds, 8 ounces. The fish measured 32 inches long and 22 and one-fourth inches in girth. The catch surpasses the previous record for a rainbow trout in Tennessee of 16 pounds, 15 ounces set in 2002 by Ronnie Rowland at Fort Patrick Henry Reservoir. 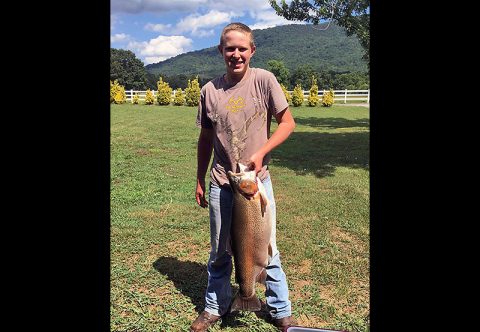 Morgan caught the record fish in a farm pond owned by a friend of his grandfather.

He had agreed to help remove a snapping turtle from the pond and was invited to bring a fishing pole along. Morgan didn’t know that this favor would lead to a new state record.

After 45 minutes, Morgan had fished a little, caught the turtle and decided to fish for another 10 minutes before leaving. He cast again and after a 20 minute struggle, he had the fish on shore.

A sophomore at Polk County High School, Morgan fishes several days a week, mostly in the Hiwassee River. “I just love being outside, hunting and fishing,” said Morgan. Morgan has already dropped the fish off at a taxidermist.

“We’re very excited for this young man to find himself in the record book,” said TWRA Region III fisheries program manager Mark Thurman. “With so many records being broken these days, we look forward to seeing what the next state record fish is.”