Pasadena, CA – On June 30th, just in time for the global celebration known as Asteroid Day, NASA’s Dawn spacecraft completes its primary mission. The mission exceeded all expectations originally set for its exploration of protoplanet Vesta and dwarf planet Ceres.

The historic mission is the first to orbit two extraterrestrial solar system targets, and the first to orbit any object in the main asteroid belt, between Mars and Jupiter. On March 6th, 2015, Dawn also became the first spacecraft to enter orbit around a dwarf planet.

An infographic highlights some of the accomplishments of Dawn’s journey since launching in September 2007. Dawn has traveled 3.5 billion miles (5.6 billion kilometers) since launch, and has made 2,450 orbits around Vesta and Ceres. The spacecraft has returned about 69,000 images, combined, of both bodies.

Dawn’s advanced ion propulsion system made it possible for the spacecraft to orbit two targets in the main asteroid belt. The spacecraft has logged about 48,000 hours of ion engine thrusting.

Scientists have learned a great deal about these unique, massive residents of the asteroid belt through data from the mission. Dawn has revealed that while Vesta is a dry body, Ceres could be as much as 25 percent water ice by mass. 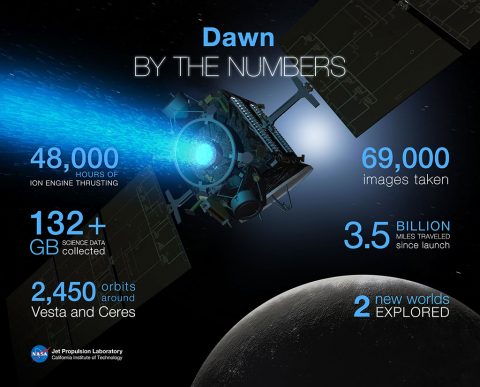 Dawn also discovered many intriguing features at both bodies — Vesta is home to a mountain whose height is more than twice that of Mount Everest, and Ceres has a crater called Occator with mysterious bright features that continue to spark scientific investigation.

More information about Dawn is available at the following sites: